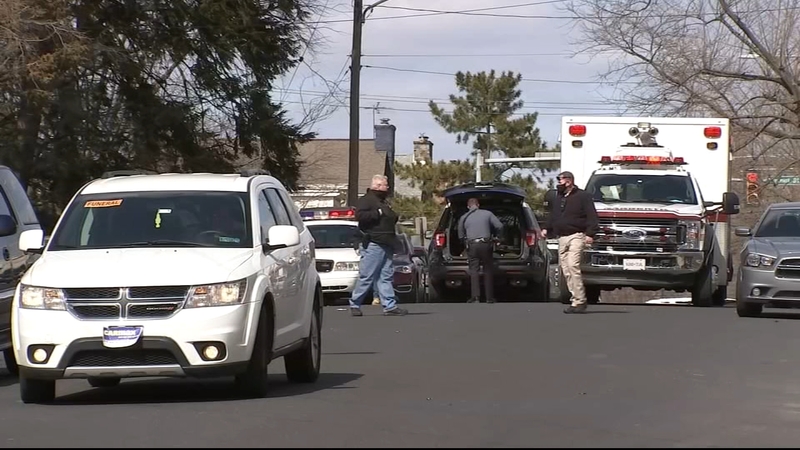 UPPER DARBY, Pennsylvania (WPVI) -- Two people were injured after gunfire erupted at a cemetery on Thursday afternoon in Upper Darby, Pennsylvania, according to police.

It happened just before 12 p.m. on the 200 block of Powell Lane at the Friends Cemetery.

Authorities say a funeral was being held at the St. Demetrios Greek Orthodox Church and across the street a burial for a young man who was shot and killed three days ago in Philadelphia.

Fire and police officials are investigating a shooting at the Friends Cemetery in Upper Darby, Delaware County. The shooting happened Thursday just before noon on the 200 block of Powell Lane.

Several shots were fired at the burial sending two people to the hospital, officials say. One of the shooting victims suffered a graze wound to the face and the other is in surgery, police said.
Two gunmen near the scene were seen running away, witnesses confirm.

Superintendent Timothy Bernhardt of The Upper Darby Police Department said, "There aren't any words to say. It's terrible. A sad situation that loved ones are here burying someone that was killed in a tragic incident, and they have to deal with this."

Gilbert says he is not at all surprised by the shooting.

"We've had a shooting here just over a month ago right here on the street in front of our church," he said.
Gilbert says many of the burials have been for shooting victims, and with tensions already running high, he fears for his congregation's safety.

"There is an unwillingness with the cemetery across the street to ever bring in any police presence for what are essentially gang funerals," said Gilbert. "We have begged them time and time again to have the cops come and direct the traffic to have them monitor the situation here. There's a refusal from that side to take any action."

Police say they're working with the cemetery and the director to make sure they're notified anytime there is a burial.

"There was one other shooting in the past. No one was hit in that one," said Bernhardt. "This is the first shooting where someone was hit."

The suspects remain on the loose at this time. Anyone with any information is asked to call police.
Report a correction or typo
Related topics:
upper darby townshipcrimegun violenceshooting
Copyright © 2021 WPVI-TV. All Rights Reserved.
SHOOTING