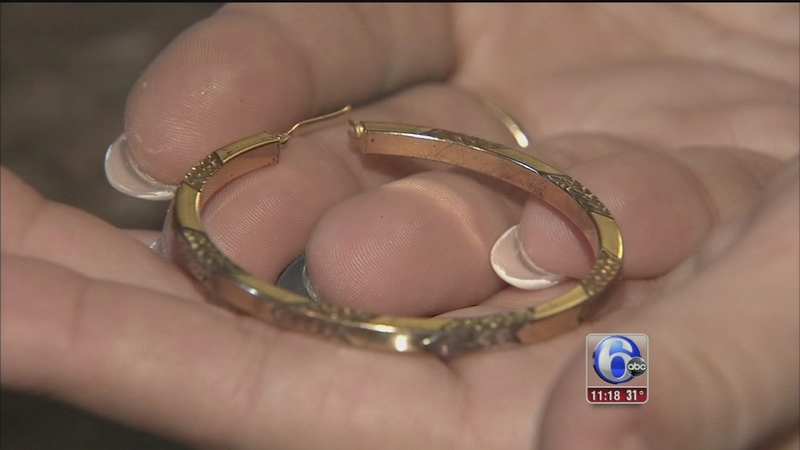 PHILADELPHIA (WPVI) -- All that glitters isn't gold, and that could also be true inside a jewelry store.

The practice is called under-karating. It's when a piece of jewelry you bought has fewer karats than what you were promised.

Michelle Maize was worried that is what happened to her after shopping at a store in Philadelphia Mills.

Maize said she and her fiance spent around $10,000 buying almost every piece of jewelry she owns - from her engagement ring to nearly a dozen pairs of earrings, purchased three to five years ago.

But she says she felt cheated after she took her gold to her local jeweler to get it cleaned.

"He went through all of this jewelry with me and told me what was fake," she said. "I'm really upset."

She says he told her some pieces like her engagement ring, the most expensive item, were real - but several pairs of earrings were not what, she says, she was told she was buying.

Mark Lichterman of JM Lichterman and Company, a jeweler since the 1960's, said "These are completely junk."

"I feel very ripped off," Maize said. "We paid 14 karat gold prices for silver," she said.

But we didn't take Mazie's word for it. We went in undercover to the same store and purchased two pairs of earrings of our own.

One tested as true 14 karat gold, but the other did not test to be the 10 karat quality we were told we purchased.

And experts warn, it isn't just happening at this one store.

"That is a lot of gold consumers are paying for that isn't being bought," said Cecilia Gardner, President, CEO and General Counsel of the Jewelers Vigilance Committee.

The Jewelers Vigilance Committee conducted a national sting, and found some jewelers under-karating their gold to skim off the top, telling buyers they are buying 10 or 14 karat when the quality is much less.

On top of that Gardner says, by law, nothing under 10 karats can be advertised or sold as gold in the United States. But she says it often is.

"It is the places that sell to consumers who are looking for bargains that seem to have a more prevalent problem in this regard," said Gardner.

The store we purchased from was in an outlet mall. We tested the 10 karat earrings we bought three times - including a scratch test, metal test, and state-of-the-art x-ray test.

"Do you think it's odd though that we got a complaint that you guys were selling things that weren't real gold and then we buy these and they are not what they are advertised as?" asked Action News Investigative Reporter
Wendy Saltzman.

"Yeah, I think that is very odd," Bang said.

Bang said he was the victim, and blamed the manufacturer.

"We are also in the same boat because we are also buying them as ten karat gold," he said.

Several days later Bang, who is also the owner's son, invited us back to pick out a few items of our own - which we then took down to the Melting Bar, a jeweler they chose on Jeweler's row, for another test.

Three items out of ten we tested at the Melting Bar, including the earrings we bought, turned out to be under 10 karat. Two were eight, one was nine karat.

"Anyone who has ever purchased jewelry off of me, I would like them to come back to me so I can handle it for them," said Bang.

Every karat of gold that is over-valued above the actual karat is a 4% profit right off the top.

And again, the FTC says items under 10 karat should not even be advertised as gold.

We have some tips when buying gold:

-First, the higher the karat, the less likely you are to be under-karated.
-Also, look not only for a karat stamp, like 10 or 14 karat, but also look for a manufacturer's trademark near that stamp for authenticity.
-And lastly, Gardner says, it's best to go to a well-known jeweler. If you are bargain shopping, beware: you might get what you paid for.

For a free test on your gold, you can visit: