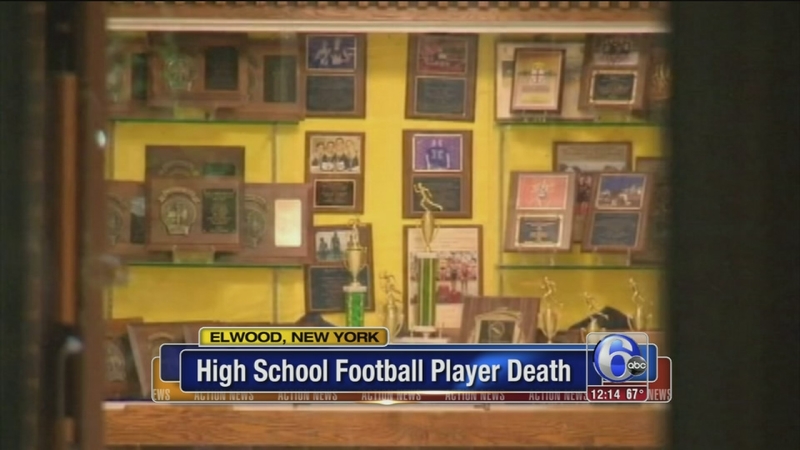 Junior Tom Cutinella, a guard/linebacker for Shoreham-Wading River High School, collapsed during the game against John Glenn High School after taking a big hit by an opponent and suffering a head injury.

The incident occurred in the third quarter of the game at John Glenn.

The Superintendent of Shoreham-Wading River Schools released a statement saying, "The Shoreham-Wading River School District community is terribly saddened to learn of the tragic death of Tom Cutinella, a high school junior and varsity football player. Tom passed away after colliding with an opponent in Wednesday night's game against Elwood John H. Glenn High School."

"Our school community is truly devastated by this awful news and we all extend our deepest condolences to Tom's family and friends during this difficult time."

"Tom played football for the district since he entered the high school in ninth grade, becoming a member of the varsity team this year. In addition, Tom played lacrosse and was a member of the Natural Helpers program, which focuses on peers helping peers. He excelled academically, had a great sense of humor and was just a great individual overall. He was well-liked among students and staff and he will truly be missed."

"Each student is a valued member of our educational community and a young person's death is always tragic. A sudden loss like this can have a profound effect on the entire school community. Grief counselors will be made available to students and staff for as long as needed as we mourn and cope with the loss of such an amazing life."
Related topics:
sportsnew yorkchild deathu.s. & worldhigh school football
Copyright © 2022 WPVI-TV. All Rights Reserved.
TOP STORIES
AccuWeather: Few Snow Showers Sunday
Police investigate 2 deadly hit-and-run crashes in Philly
Truck with 100 monkeys crashes, 1 still on the loose, police say
Montco health department ties 10 hepatitis A cases back to restaurant
Arnold Schwarzenegger involved in multi-vehicle crash
NYPD officer killed, suspect is from Allentown
How a 73-year-old grandmother outwitted a scam artist
Show More
Shootout at Northern Liberties gas station
Driver dies in fiery crash in Port Richmond
Grocery stores faced with heavy impacts amid supply chain issues
Temple U updates mask guidelines ahead of students' return to campus
Police officers, good Samaritan lift SUV off trapped woman
More TOP STORIES News