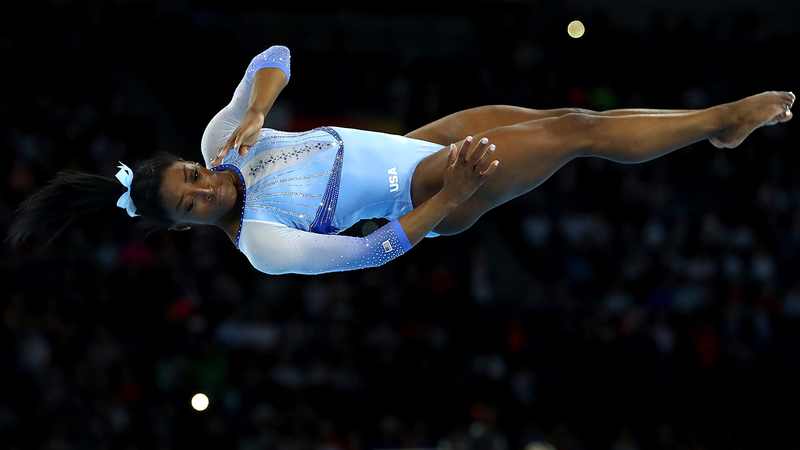 STUTTGART, Germany -- Simone Biles has made gymnastics history again, but this time, her incredible moves have been met with controversy.

In a show-stopping performance at the world championships in Stuttgart, Germany, over the weekend, the 22-year-old gymnast successfully landed two historic gymnastics moves: the double-double dismount on the balance beam and triple-double on floor.

Her landing of the triple-double on the floor has been named after her as the Biles II in the Gymnastics' Code of Points. She already created a floor element named Biles, so this one becomes Biles II.

She lands the DOUBLE-DOUBLE and this element will be called the "Biles" from now on.

The International Gymnastics Federation said on Friday that risk played a role in how it graded Biles' new beam dismount, a decision which has frustrated the highly decorated gymnast.

Biles first landed her double-double dismount -- two flips and two twists -- at the U.S. nationals in August. After her performance at the world championships, it will bear her name in the sport's Code of Points.

Biles has expressed frustration that the dismount was given an "H'' difficulty value. That's one value higher than any other women's beam element in the Code, but some observers argued the extra difficulty was enough to deserve an even higher rating.

Biles described the decision with an expletive on Twitter on Tuesday.

The FIG's women's technical committee says its decision took into account an "added risk in landing ... including a potential landing on the neck." The FIG sometimes lowers the value of risky elements to make safer ones more attractive by comparison.

"Reinforcing, there are many examples in the Code where decisions have been made to protect the gymnasts and preserve the direction of the discipline," the FIG said.

SEE ALSO: Olympic gymnast presented with key to the city of Houston

USA Gymnastics said in a statement on Friday it "respectfully disagrees" with the FIG ruling.

"The safety of athletes is always a top priority for us and the sport in general, however we believe the skill should be given the value that it merits," it said.

"Simone is an amazing gymnast who continues to develop and challenge the norm with creative and technical ability and skill, and we applaud and support her efforts."

Simone Biles comes out on top at Houston Sports Awards

Biles will now have two moves named after her for floor exercise and one each on the vault and balance beam.