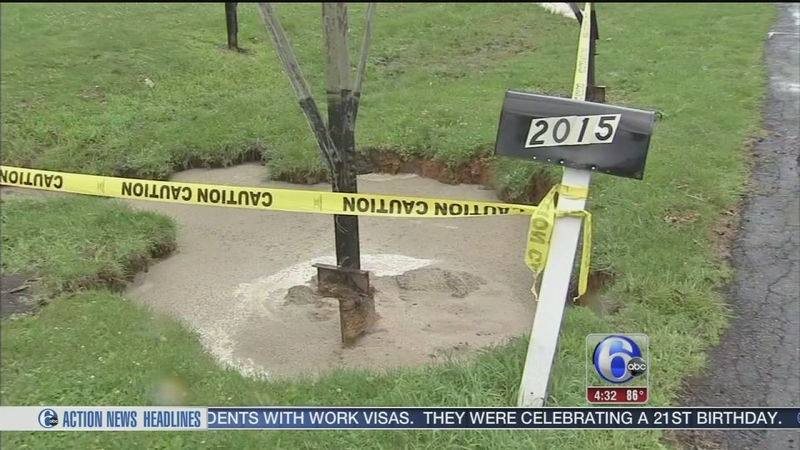 BETHLEHEM TWP., Pa. (WPVI) -- Residents of a neighborhood in Bethlehem Township were alarmed when they saw a 5-foot deep sinkhole had opened at the base of a large electrical transmission tower.

The sinkhole opened up during a torrential downpour Monday night.

A drainage ditch runs under the tower, and the drain pipes were overwhelmed.

The sinkhole opened beneath one of the legs of the 75-foot tower and then spread to another.

PPL Electric Utilities says the tower carries 69,000-volt transmission lines, but it was never in danger of falling.

They took no steps to de-energize the lines, since the tower wasn't even leaning.

The fire department advised nearby homeowners to leave while the situation was being evaluated.

A couple did leave, but everyone was back in their homes by noon.

Others moved their cars out of the street in case the wires came down.

By noon, a PPL crew had filled the hole with stabilizing material and placed sandbags in the drainage ditch to slow any further water flow that might be caused by passing showers expected Tuesday afternoon.

PPL will fill the rest of the hole with top soil and plant grass.

Later this summer they will be replacing all of the towers along this stretch.

Meanwhile, at the Willow Park business center, mud had to be cleaned up following the storms. It was left by the swift flowing waters of Nancy Run that overran its banks and toppled a stone wall.

The water surged into the shops and businesses, leaving a sopping mess.

The Keystone Pub was surrounded by sandbags last night as floodwaters came racing down the hill.

Residents of Sunset Drive were also cleaning up Tuesday.

A wall of water swept through the neighborhood, ripping up the pavement and flooding homes. They've had it bad here before but, this time, it came on like a dam burst.

"The water was just racing down here and all of a sudden you realize 'oh my gosh, this is not going to be a good turnout," said Carol Kinney.