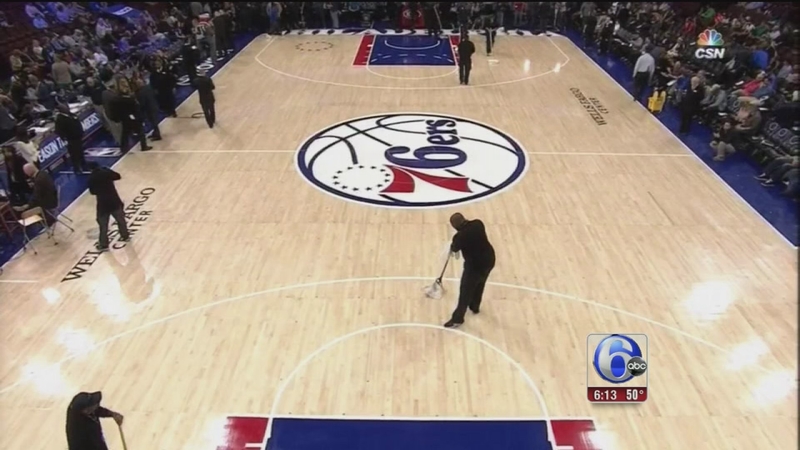 PHILADELPHIA -- A scheduled game between the Sacramento Kings and Philadelphia 76ers was postponed Wednesday night by the NBA because of condensation on the court at the Wells Fargo Center.

The game, which was slated to start at 7 p.m., was called off at 8:03 p.m. A makeup date was not immediately announced.

The Philadelphia Flyers hosted an NHL game at the arena Tuesday night and the ice surface remained under the basketball court - standard procedure at the Wells Fargo Center. However, Wednesday was an unseasonably warm, humid day for late November in Philadelphia, and it likely affected the surface.

"With our ice surface, sometimes humidity is our biggest opponent when we prepare for a game," said John Page, president of the Wells Fargo Center complex. "We've never had an issue before, but we need to make sure we don't have this issue again."

Sacramento center DeMarcus Cousins said players noticed the court was slippery at Wednesday morning's shoot around. By pregame warmups, the problem had worsened.

"It was pretty bad," Cousins said. "I've never seen anything like that before."

Cousins joined the fruitless effort to prepare the court, pushing around a pair of mops during the delay. He entered averaging 35.3 points in his last four games and was disappointed the contest was postponed.

"Guys go through their ritual, guys prepare for their games and, like that, they're telling us we're not playing; it's kind of disappointing," he said. "I'm kind of glad it did go this way. Player safety should be considered first. I think they made the right decision."

Tonight's game has been postponed... y'all can trust the process but not the floor? Smh, @Sixers.

Sacramento announced the postponement on Twitter and razzed the 76ers, saying "y'all can trust the process but not the floor? Smh (shake my head), Sixers."

Fans booed when the postponement was announced. 76ers CEO Scott O'Neil said tickets to Wednesday's contest would be valid for the makeup game, and fans in attendance also would get an additional ticket to another game - either Dec. 5 vs. Denver, Dec. 14 vs. Toronto or Dec. 18 vs. Brooklyn - plus a rebate on parking.

"I know this is a tremendous inconvenience to the fans, so I certainly apologize on behalf of the organization," O'Neil said.

It's the first postponement in the NBA since the league called off two games on Jan. 23 - Philadelphia at Boston and Utah at Washington - because of a winter storm. At least one game has been postponed in six of the past seven seasons.

"The Philadelphia 76ers announced that tonight's game against the Sacramento Kings has been postponed due to an issue with the surface of the court and with player safety in mind. Arena officials worked diligently to address the issue, but NBA officials determined that the court was not suitable for play.
Tickets for tonight's game will be honored when the game is rescheduled later this season. Parking receipts for tonight's game will be honored at the rescheduled game between the 76ers and Kings.

Additionally, fans who purchased tickets for the game will have the opportunity to receive complimentary tickets to one of the following games, courtesy of the 76ers: Dec. 5 vs. Denver Nuggets, Dec. 14 vs. Toronto Raptors, or Dec. 18 vs. Brooklyn Nets.