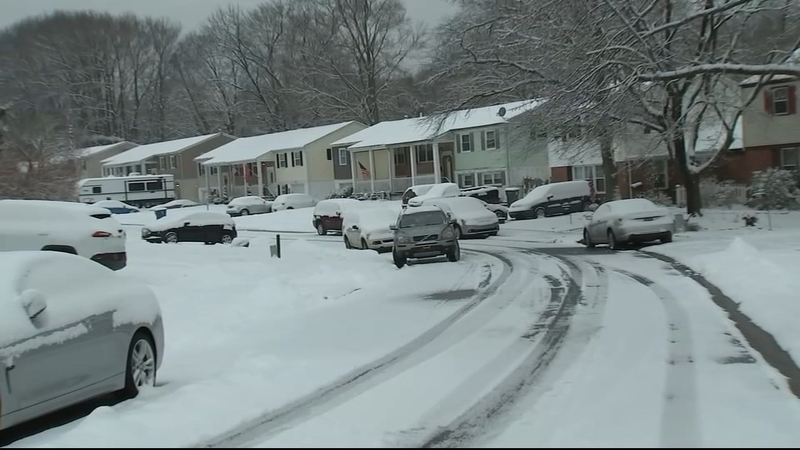 Early commuters wake up to fresh coating of snow

CLAYMONT, Delaware (WPVI) -- Occasional breaks in the snow were mixed with moments of heavy precipitation that left a fresh coating on top of what was already there in many neighborhoods Thursday.

"It wasn't that much. Wasn't too bad. Not like last week," said Chester, Pa. resident Darryl Thomas.

"Not too bad. Cars on the road. Other than that, it's great," said Newark, Delaware resident Steve Wiley.

The overall consensus for drivers in Claymont, near the Delaware and Pennsylvania border, was that the snow wasn't as much of a headache this time around.

"I love snow. I don't mind cleaning off my car and driving in it if it's not terribly scary," said Philadelphia resident Maura Bernardo.

And for the most part, it wasn't scary for those who commuted between Delaware and Pennsylvania.

Plow truck drivers were able to keep up on busier roads since the snowfall was light enough at times.

"The major roads were pretty clear. But it did take me a while to clean off my car. It was more inches than I thought it would be," Bernardo said.

The layers that piled up on top of cars did require some work. But for some, the task has become a part of life that no longer causes worry.

"It's neither here nor there. I work in health care so the car's got to get cleaned off and I have to get to where I have to get to, so I'm kind of used to it. I've lived up north for 15 years so this is nothing," D'aloisio said.

And for others who are used to driving in these conditions, caution is the word of the day.

"I take my time. I stay in the right hand lane because people don't care. That's on them," Thomas said.