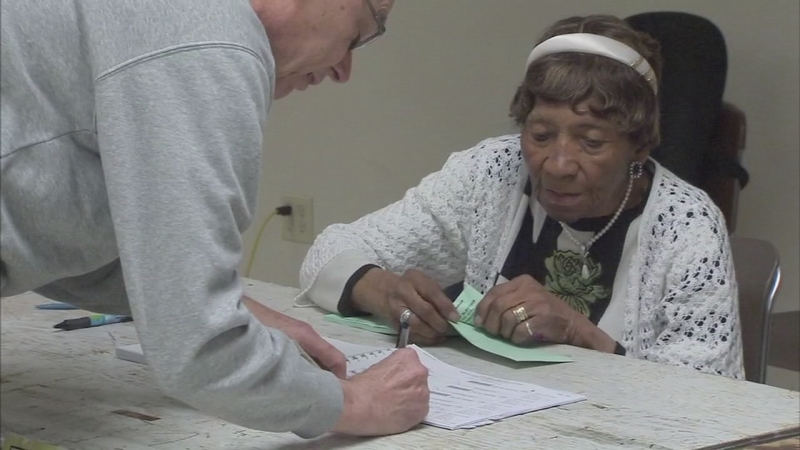 LAWRENCE, N.J. (WPVI) -- Ninety-six-year-old Laura Wooten was at her table in the Lawrence Road fire company Tuesday working the polls, the same as she has every Election Day for the last 78 years.

The great-great-grandmother started as a poll worker in Princeton in 1939 when Franklin Delano Roosevelt was president.

"A lot of people say that your vote doesn't count, but if you want to complain about something, how you going to get something done if you don't vote?" Wooten told Action News.

She's done it all: school board, primaries, and general elections.

Election days can be tiring for poll workers even half her age; the polls open at 6 a.m. and close at 8 p.m.

"Long, long day. I get up at around four o'clock in the morning," Wooten said.

When Lauren's Wooten started working at the polls, there were paper ballots, not machines.

Ms. Wooten's had some favorite candidates over the years. She liked FDR and JFK, and she remembers a popular write-in candidate.

Believe it or not, the 96-year-old has a job working part-time checking meal cards in the cafeteria at Princeton University.

Her fellow poll workers, Angelo Rotundo, Jean Hultgren, and Geraldine Watts, had nothing but nice things to say about Ms. Wooten.

"She's an inspiration for everybody. She's got many years on me and I'm up there. She's great," Rotundo said.

"I was born in 1939 and she started working that year, that's unbelievable to me," Hultgren said.

"She's an awesome person. She makes me feel so proud. Used to her sweetness, she's just a good person and I'm proud that I met her," Watts said.

Loretta Wooten doesn't know how many more elections she'll work, but she's proud of the contribution she's made, helping people to exercise their right to vote for almost eight decades.

"I think I've done my civic duty working on the polls and encouraging people to vote," Wooten said.