Virtual panel: Actors come together to help Stomp Out Bullying 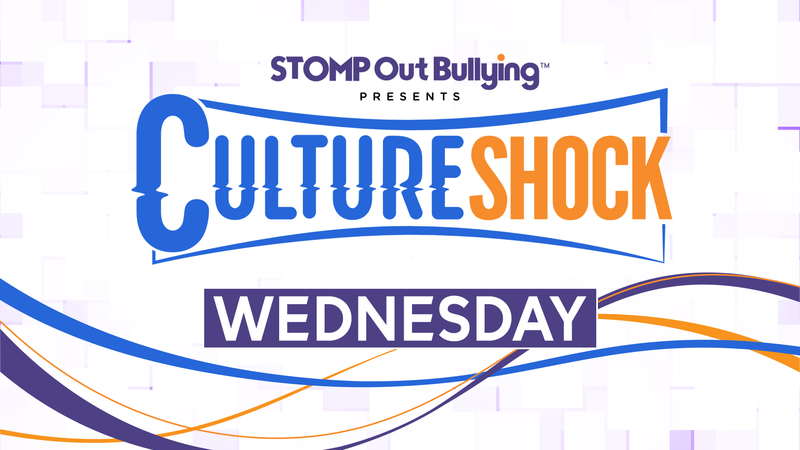 Actors come together to help Stomp Out Bullying

NEW YORK -- Young actors are coming together virtually for an important cause: to help put an end to bullying.

Panelists discussed their personal experiences and offer advice on what to do if students witness bullying.

The actors gave advice to students on how to overcome feelings of bullying or not feeling included. They also touched on the overall consequence of bullying both in society and on an individual.

The panel is part of Stomp Out Bullying's National Culture Week that will take place from April 19 to April 23.

Browning starred in 2007 as one of the main characters, Sasha, in the live-action theatrical feature "Bratz: The Movie." She joined the cast of "Meet the Browns" during the second season, replacing Brianne Gould as the character Brianna Ortiz. She makes a brief appearance in Prima J's "Rockstar" music video, as well as B5's music video "U Got Me". Browning had a recurring role on the Disney XD series "Pair of Kings." She appeared in two episodes of "The Secret Circle," a TV series based on the novels of the same name by L.J. Smith. In April 2012, Browning was cast as Jelena Howard in VH1's "Hit the Floor." Before "Hit the Floor," Browning was not a professional dancer. Browning starred alongside her "Hit the Floor" co-star, Katherine Bailess, in the YouTube comedic series "S*** Southern Women Say." In July 2016, it was announced that Browning would star in the role of Samantha White in the Netflix satirical-drama series "Dear White People." In 2017, Browning was cast in the role of Lizzie on the Netflix horror film "The Perfection." The film was released on May 24, 2019.

Katherine McNamara
McNamara currently stars in the CW's "Arrow" as Mia Smoak (aka Blackstar). Initially only referred to as Blackstar, Mia is an underground cage fighter from a possible future. The reveal of Mia's true identity as the daughter of Oliver Queen and Felicity Smoak was described as the best twist of Season 7. McNamara is perhaps best known for her role as Clary Fray in the Freeform series "Shadowhunters." The fantasy show, based on a series of young adult books, drew a massive fanbase and garnered multiple People's Choice Award and Teen Choice Award wins. Last year, McNamara reprised her role as Sonya in the third installment of "The Maze Runner" trilogy, "Maze Runner: The Death Cure," alongside Dylan O'Brien and Kaya Scodelario. She originated the role in the second film "Maze Runner: The Scorch Trials."

Michaela Jaé (MJ) Rodriguez
Rodriguez can currently be seen starring as housemother Blanca in Ryan Murphy's groundbreaking series "Pose" on FX. The series was nominated for a 2019 Emmy Award and a 2018 Golden Globe Award in the category of Best Television Series Drama as well as a Writers Guild Award and won both a Peabody Award and GLAAD Media Award in the category of Outstanding Drama Series. Rodriguez was most recently nominated for an MTV Movie + TV Award in the category of Breakthrough Performance. She was also nominated for 2 Gold Derby Awards for Drama Actress and Breakthrough Performance for her work in "Pose." The series will make a highly anticipated return to FX for its third season. She historically won the 2019 Imagen Award for Best Actress in Television. Born and raised in Newark, New Jersey, Rodriguez made her Off-Broadway debut in New World Stages production of "Rent" as Angel before continuing onto New York City Center to star in Encores! production of "Runaways." She recently starred as Audrey in the Pasadena Playhouse's production of "Little Shop of Horrors." In 2018 she made her Tribeca Film Debut starring in the indie film "Saturday Church," a performance which garnered her a Tribeca Film Festival Nomination for Best Actress. Her other television credits include "Nurse Jackie" and Marvel's "Luke Cage."

Jordan Fisher
Fisher is a multi-hyphenate to the fullest extent for his age-producing, music, gaming, acting, dancing, Broadway: no one else his age has a hold in so many verticals within the industry. From portraying the title character in "Dear Evan Hansen" (and first biracial actor to portray the character), starring in the incredibly successful franchise for Netflix's "To All the Boys" sequel and most recently the major Netflix rom-com "Work It," Fisher has been singled out by multiple outlets for his work. Vanity Fair said, "Those of you who saw 'To All the Boys: P.S. I Still Love You'-or were able to catch him on Broadway in 'Dear Evan Hansen' just before the pandemic closed all theaters down-will know Fisher's magnetism already. Those who aren't familiar ought to be immediately smitten with Fisher's brand of warm suavity. . ." Next up, Jordan is starring in the feature film "Hello, Goodbye and Everything In Between," which he will also serve as Executive Producer, as well as guest star as Bart Allen, aka Impulse, on The CW's "The Flash". Jordan also has become active in spreading awareness and using his voice to speak on racial injustices.

Hudson Yang, named by Variety, The Wrap and other publications as a rising star to watch in young Hollywood, spent six years as irrepressible protagonist Eddie on ABC's historic Asian American family sitcom "Fresh Off the Boat." His performance garnered him multiple NAACP Image Awards nominations for Outstanding Performance by a Youth, and Teen Choice Awards nominations as Choice Scene Stealer in 2016 and Outstanding TV Comedy Actor in 2017 and 2018. Yang has also appeared on "Family Guy," Disney's "Sophia the First," "Liv and Maddie and The Lion Guard," and PBS's "Cyberchase. "He will next appear in the indie movie "The Ray." An amateur chef, Yang is an owner of the West LA restaurant/lounge Sorry Not Sorry and is developing a number of unscripted food TV projects through his production company, Huje. Born and bred in Brooklyn, Yang now lives in Ladera Heights, California.
Report a correction or typo
Related topics:
societyactorbullyingfresh off the boatryan seacrestu.s. & worldstudents
Copyright © 2021 WPVI-TV. All Rights Reserved.
More Videos
From CNN Newsource affiliates
TOP STORIES