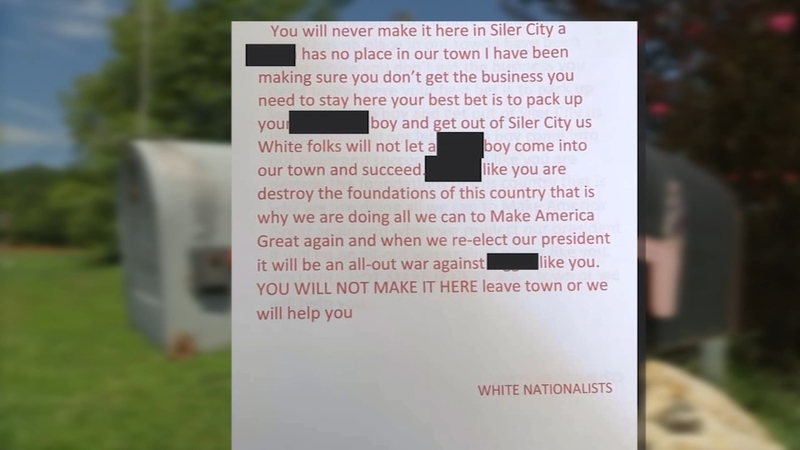 Restaurant sells out of food in wake of threatening racist letter

SILER CITY, North Carolina -- A North Carolina restaurant targeted by a threatening racist letter received such an influx in business it had to close because it ran out of food.

"Once I opened it and started reading the letter, I got to maybe the second or third line and I took the letter and I told Ivan to read it because I started tearing up because it was making me angry," Chaney told WTVD-TV.
The owners posted the letter on social media, pushing back against whomever wrote it and showing that they would not be bullied out of town.

The county's sheriff's office even opened an investigation into the letter, saying it may constitute as a hate crime. A deputy was posted outside the restaurant to help with security.

"We're going to be looking at everything that we can to solve this crime," Chatham County Sheriff Mike Roberson said. "But there's a bigger issue and you see it sort of weaponized, honestly, nationally. The racial issues have sort of become more and more prominent."

And while he's concerned about of the state of affairs nationally, he's convinced that the vast majority of citizens embrace the county's diversity.

The constant ringing of the cowbell last attached to the door of the Chicken Shack last Friday may have been proof he was right.

"For every person who's got an opinion, hate like that to express, there are a lot more people that will be showing some love," said Pittsboro resident David Boynton.

Boynton had never heard of the new restaurant until the hate note popped up on his Facebook feed.

He has eaten every day at the restaurant since.

Boynton, who is white, added, "I feel like I'm here to put a hand up and stand for what's right."

Chaney pointed out that like Chatham County, his staff is diverse.

His partner is Puerto Rican. Some of his wait staff are white.

And customers from all walks of life have been coming through his doors.

Chaney, wiping the sweat from his brow as he stood in the hot kitchen, decried what he believed are the politics of hate.

"We're not political people. We don't care if you're a Republican or Democrat. We don't care what you are. We're about cooking soul food and making people happy," he said.

He also countered some insinuations on Facebook that maybe this is a publicity stunt, saying they didn't need more business.

"We're not asking people come support us. If you want to support something support a non-violent organization. Support the Sheriff's Association. They're doing a great job in what they're doing," Chaney said. "Support the NAACP. But what we're trying to do is just bring attention to a situation that we have because we're not going to let hate and fear run us off."

Because of the influx of diners, the restaurant ran out of food Sunday, but has since reopened.