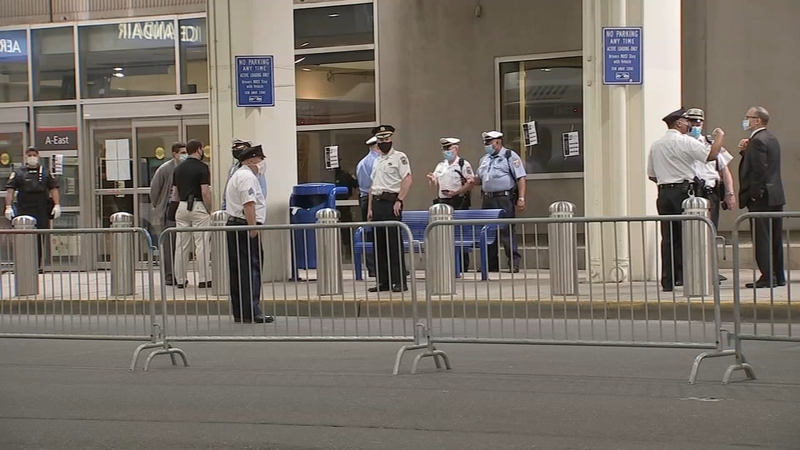 Ambulances, outreach vehicles, and additional officers were seen parked outside Terminal A.

Coronavirus testing for the homeless was available on site.

People were given several options for their relocation, including being placed in a shelter, boarding a free SEPTA bus, or receiving emergency care.

Approximately 60 Philadelphia officers are stationed at the airport to support outreach teams. The officers consist of uniformed, plainclothes, and specialized unit personnel.

Philadelphia Police Commissioner Danielle Outlaw added, "The officers that you see here are already CIT trained- Crisis Intervention Trained- and really have experience working with those who are underrepresented."

An estimated 150 people had found shelter in the airport at its peak, but that number has dwindled in recent days with additional outreach. Around 50 people spent the night at the airport Monday night.

The city had planned to disperse the group last Friday. But after advocates for the homeless threatened a lawsuit, the city held off until Tuesday when they could offer rapid testing.

Abernathy said, "It's also not the only airport in the country facing the same issues. I think this is a nationwide problem we're trying to address."

When outreach workers approached people, they discussed their options for relocation and provided safety kits. One-thousand such kits were donated to the city by American Airlines. They were packed with a mask, gloves, hand sanitizer, soap, and tissues.

A statement from PHL read in part:

"The decision to limit building access to only those with airport business was a difficult one that followed months of attempted interventions, compassionate outreach and ultimately, a destruction of property and deterioration of safety."

Now the airport will spend the coming weeks preparing for an increase in air travel, which includes deep cleaning the terminals.