WPVI
By Dann Cuellar
PHILADELPHIA (WPVI) -- Americans are waiting for their direct cash payments and small business loans that don't have to be repaid if employers keep their workers on the payroll. But for all these folks, staying above water, it can be very tough.

Driving across Philadelphia, you'll see a growing number of businesses that are boarding up out of concern of looters. This after being shut down by the government's efforts to curb the spread of COVID-19.

And the people who worked at those businesses and not getting paid are beginning to hurt.

"The money is running low and we're trying to figure out when will this end," said Charmaine Custis of Overbrook.

Many are waiting for those stimulus checks from the federal government that are still days if not weeks away.

To be clear there are stark differences between those whose jobs are deemed essential and remain employed and getting paid.

"My wife and I are still working, so yeah, we're very lucky and trying to do whatever we can being in the position to support local businesses, trying to do takeout when possible," said Jack Jokinan of Fishtown.

But for those whose jobs shut down, many were living paycheck to paycheck to begin with and it is clear they need to get back to work.

We asked Tasha Williams of North Philadelphia how much longer she could hold on without work?

"I don't know, it's not gonna be much longer, I really don't. My refrigerator is almost on (empty). I really don't know how am I suppose to feed my kids?" asked Williams.

She says at least when schools were open that's when her children, like many others, got what often would be their only meal of the day. But schools are closed. The demand at food banks is skyrocketing.

"It's bad out here, especially if you're in North Philly," said Williams.

Keith Robinson of Chester who owns his own computer business has seen the despair and offered this, "I have hope, hope is often the last thing to die in anything, so keep hope," said Robinson.

The Internal Revenue Service did say on Tuesday that those stimulus checks should begin being mailed out by around April 15.
Report a correction or typo
Related topics:
societyphiladelphiabusinessfoodcoronaviruscommunity
Copyright © 2020 WPVI-TV. All Rights Reserved.
CORONAVIRUS 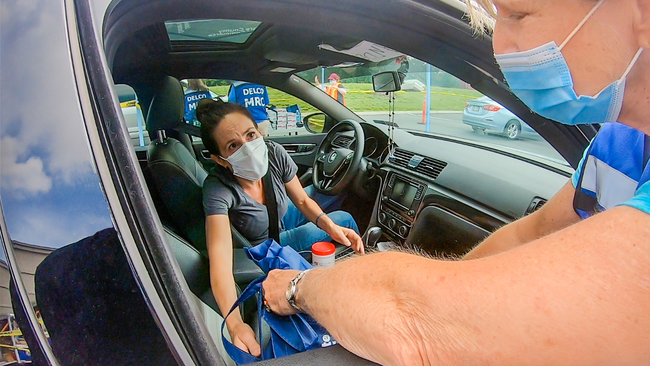