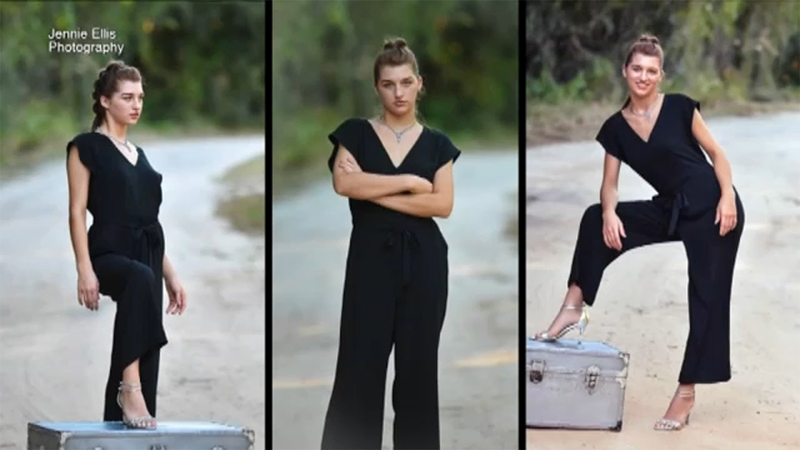 TAMPA BAY, Florida -- It was her senior year homecoming dance, and Darcy Krueger was ready.

She had on rhinestone shoes, her hair was done, and she was, for lack of a better word, iced out.

The only thing was, despite her best efforts, she hadn't found the perfect dress. But, no worries, she thought. She already had a jumpsuit in her closet, and she could easily dress it up for the dance.

Or so she thought. When the 17-year-old arrived at the Tampa Bay Homeschool homecoming dance on September 27, the event planner stopped her. She wasn't allowed in.

The reason? She wasn't wearing a dress.

"The first moment the event planner sees my pants, she completely dismisses me," Darcy told CNN. "My friends are kind of in disbelief too, and they're like, 'This is wrong.'"

The dance was held for home-schooled students in the Tampa Bay, Florida area. Tickets were $50, but the dance itself wasn't associated with a specific school.

The dress code for the dance, Darcy learned, did not allow pants. Trying to hold it together, she called her mom, who was stunned.

"I knew the dress code, but it didn't occur to me that it was going to be a problem," Darcy's mother, Melissa Krueger, told CNN. The emphasis of the dress code was on modesty and "coverage of all the lady bits," she said.

Strapless, knee-length and two-piece dresses were allowed at the dance.

The dress code, sent to CNN by event organizer Stephanie Voth, states the requirement for "semi-formal dresses for young ladies," before advising girls to "plan your attire within a conservative manner."

The dress code allowed strapless, knee-length and two-piece dresses with less than a two-inch gap at the midsection.

"We highly discourage dresses that are too revealing and that are simply too short," the code stated. "Dresses that expose a plunging neckline or backlines are NOT appropriate. You will not be allowed in if your dress is questionable."

The dress code for boys was dress pants, button-down shirt and a tie.

Other students were wearing things that clearly pushed the limits of the dress code, Melissa Krueger said. She couldn't understand why her daughter was the one to be denied.

"We weren't trying to bend the rules or break them," she said.

Voth, who organized the event and denied Darcy entry, said in an emailed statement: "We have 2 private events every year for our students. These events have a dress code. This particular event 390 students bought tickets. Only 1 student had to be turned away and it was due to dress code."

In the statement, Voth said Darcy was offered the opportunity to come back if she could change into the dress code and said that her ticket was refunded after the event.

Darcy confirmed she was given the opportunity to change into a dress, but by that time, she "didn't want to support the rule."

And even though the ticket was refunded, her mother said the $50 was "the least of my worries."

"The bigger question is, why can't a girl wear something other than a dress?" Melissa Krueger said. "This isn't 'Little House on the Prairie.'"
Report a correction or typo
Related topics:
societyfloridafloridadress codedancehomecoming
More Videos
From CNN Newsource affiliates
TOP STORIES