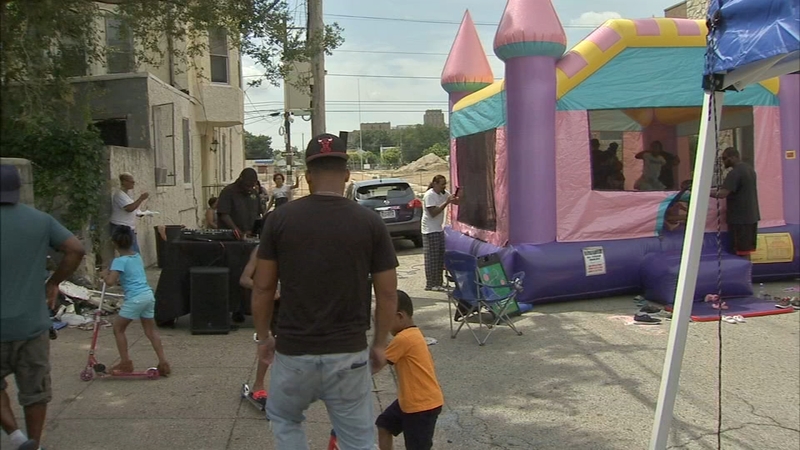 PHILADELPHIA (WPVI) -- It's these kinds of days the community can't get enough of, people brought together through food and fun.

Many would categorize what you see outside the Haven Peniel United Methodist Church in North Philadelphia as the good things in life.

"This isn't for us. This is for our community. This is our way of giving them a day they cannot think about what's happening in their lives," he said.

Pastor Brawner says their block party is supposed to be a break for a community around West Oxford Street that sees too much violence, specifically gun violence.

In fact, each shirt in this memorial in front of the church represents a neighbor who was shot and killed.

Brawner and so many here hope this block party can kick-start something good.

Church member Shanice Alberta said, "It's getting dangerous around here parts of the area and we just want everybody to have peace and come together."

Many would say the block party couldn't come at a better time.

Just overnight in the city, two people were shot in Strawberry Mansion.

Another person was shot in Southwest Philadelphia. Someone was shot and killed in Olney.

While investigations begin to solve those crimes, Philadelphia Sheriff Jewell Williams' office also joined in the battle against gun violence.

They held a gun buyback on North Broad at the Official Unlimited Boutique.

Thanks to the Sheriff and boutique owner Yani Nadav if you brought a gun, you got a $75 dollar gift card to the shop.

For Nadav the gun buyback is personal.

"Three guys came in the middle of the night with guns and they robbed us," she said.

"This should be an approach with all law enforcement all community and clergy to stop this violence and guns on the streets of Philadelphia," said Sheriff Williams.