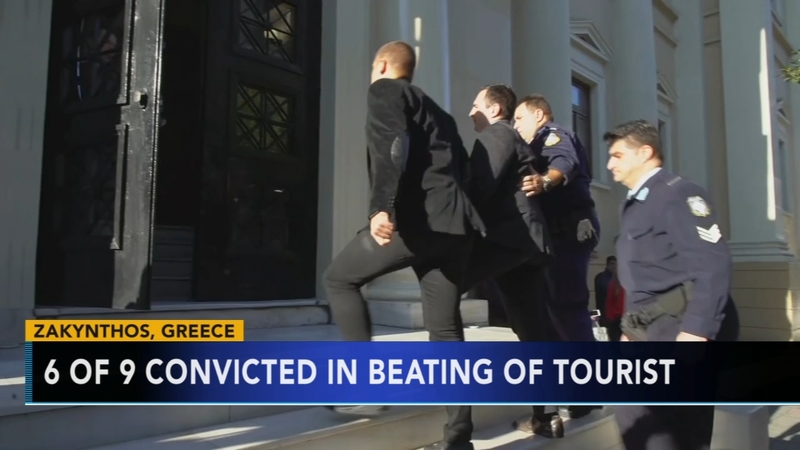 PATRAS, Greek -- A Greek court on Thursday convicted and sentenced six of the nine suspects in the fatal beating of an American tourist at an island resort last year, finding them guilty of reduced charges in a move that angered the victim's parents.

The six were handed sentences ranging from five to 15 years in prison on charges of deliberate bodily harm, reduced from intentional homicide, which carries a life sentence.

Bakari Henderson, a 22-year-old from Austin, Texas, died after being beaten in the street following an argument in a bar in the popular Laganas resort area of Zakynthos island in July 2017. One Greek, seven Serbs and a British citizen of Serbian origin were accused of involvement and tried in the western port city of Patras.

The court dropped charges against three suspects, including the Greek barman who had been accused of blocking Henderson's escape route but not of participating in the beating.

"I don't feel that it was justice for a murder," said the victim's mother, Jill Henderson. "It was more than a simple beating that killed a man and they killed him brutally. They kicked him several times in the head. You do not kick a person in the head and in the torso if you don't intend to kill them."

The Hendersons' lawyer, Andreas Patsis, said the family viewed the outcome as too lenient on the perpetrators.

"It's a decision that shocked the family. Because, according to our opinion and the prosecutor ... the sentences handed out weren't proportionate to the brutality of the act," Patsis said.

The barman was released from prison, where he had been held in pretrial detention since his arrest last year. The other two whose charges were dropped had been released on bail and had returned to Serbia.

"For us, it is vindication both for our work and for the real truth that we proved, which is far from what many have shown," Panagiotis Korantzopoulos, the barman's lawyer, said of the verdict.