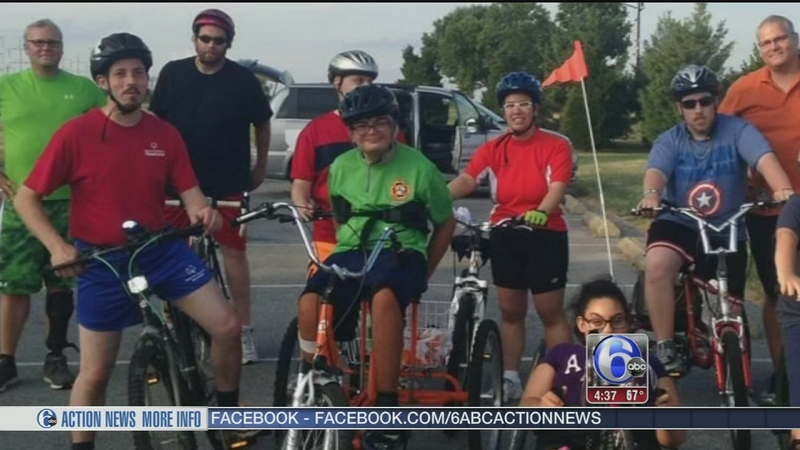 WILMINGTON, Del. (WPVI) -- Two very special teens from Delaware visited the 6abc studios Tuesday. One teen is the inspiration for his family's organization that puts smiles on the faces of kids with disabilities. The other, a girl who is about to have one pretty big ear-to-ear grin when she gets her donation this week.

Thanks to the Dover Police Department, 14-year-old Victoria Marsh got a chance to meet her idol, Taylor Swift, this summer.

It was a bright spot in a tough year for the Middletown teen, who is just getting back to the 8th grade.

"She starts school on Monday so the future is unknown but right now we get to have a normal life," said Victoria's mom, Karen Marsh.

Victoria is just one of just three people in the United States with down syndrome and a form of cancer called Osteosarcoma.

She had an amputation in February and now has a fancy foot. And this friday, Victoria is about to get a brand new bike - a lavender beach cruiser to be exact - from a very special 17-year-old trailblazer by the name of Preston Buenaga and his mom, Deb.

"Every child we have given a bike to, Preston has been there and he leans over and touches their hand and leans over like, "'t's okay, you can do it'," said Deb, who is the Executive Director at Preston's March for Energy.

Four years ago, Deb was trying to buy Preston one of these custom bikes.

"He has mitochondrial disease, which causes him to have low muscle tone so he cant ride a typical bike," said Deb. "When I saw this bike it was awesome and adaptive and he can ride it but the price tag was $2,200."

A fundraiser ended up raising enough for his bike - with $100 to spare.

"And I looked at my husband and we said there has to be a way to help other children - we have to pay it forward," said Deb.

So every kid with a disability can have the confidence and independence that Preston found on his first ride.

"He rode for an hour and a half and wouldn't get off the bike and rode all by himself! We didn't have to help him," said Deb.

Victoria's bike is the 118th Preston's March for Energy has given away and they have more than 70 kids on the waiting list to get a bike.

"She's excited to ride it down at the beach we vacation in Lewes and around the neighborhood," said Karen.

And to help raise money for these bikes, Preston's March for Energy is holding a yummy fundraiser Friday in Wilmington called Corks and Cookies.

They say it's all about seeing the kids smile, so everyone knows where their money is going.