Kids living with Autism get to live out their dreams 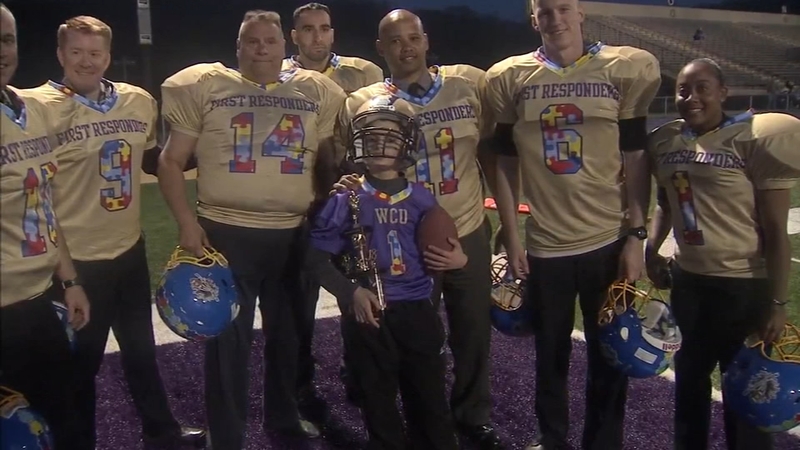 Kids living with Autism get to live out their dreams

WEST CHESTER, Pa. (WPVI) -- It was an unforgettable Friday night under the lights and in the spotlight for three very special local kids.

They are sports fans, they are athletes and they are living with Autism.

Tonight, they got to live out a dream.

At a West Chester University spring football game, the cheering isn't just for the Golden Rams.

It's also for three special children living with Autism, about to experience a night they won't forget.

Muzz Skillings, Audible for Autism said, "We take a child who we know are passionate about sports and we allow them to run for a touchdown in front of thousands of screaming people."

The night began with a ride to the field, courtesy of West Chester's first responders.

Twelve-year-old Ryan Baglin has been practicing for this night.

We asked if he ever ran in a TD before. "Not publicly or majorly. But yes you know what I mean." You've done it with friends? "Yea."

Scott Emuryan and Grammy-winning musician Muzz Skillings plan nights like this through their organization called Audible for Autism.

For many kids with Autism, playing a team sport isn't always in the cards. Ryan's parents say a night like this isn't only memorable. It's a confidence booster.

Fifteen-year-old Dani Brown felt the same when asked to sing the National Anthem.

"I'm actually autistic and I have been since I was three and it's weird for me to be doing this, but it's also for an amazing cause," she said.

At halftime, is the moment, Ryan takes the ball and is off rushing for the end zone.

On the other side, Patrick Sterling is making his inaugural touchdown run.

Organizers hope this helps erase the stigma around Autism.

For Ryan it's a chance of a lifetime.

You made it to the end zone, huh? Ryan said "Yea. I was preparing to do this when I was done, "whee."