Liam Neeson racist revenge plot comments: 'I thought I was defending her honor' 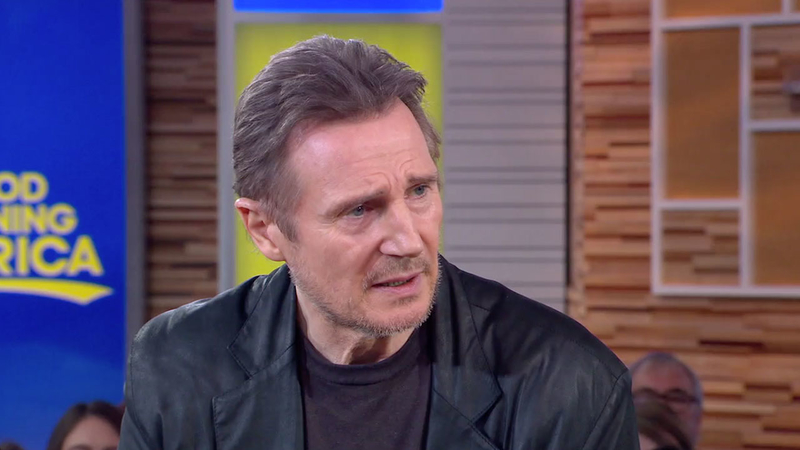 Liam Neeson is continuing to open up about his reaction to learning decades ago that a close friend had been brutally raped by a black man.

"There were some nights I went out deliberately into black areas in this city, looking to be set upon so I could unleash physical violence," Neeson said. "I thought I was defending her honor."

Neeson sat down with Good Morning America's Robin Roberts to reflect on his racist revenge plot and the reaction to it. His actions came to light because he brought up them up himself, he explained, when he was asked what experiences he drew from for an upcoming film that tackles the subject of revenge.

"I had never felt this feeling before, which was a primal urge to lash out," he told Roberts. "It was this primal hatred that really, really shocked me, when I came down to Earth and saw what I was doing. Going out looking for a fight."

Neeson explained that, when he learned about the rape, he asked about various physical attributes of her rapist, including his race, before going out three or four times looking for a fight.

"I am not racist. This was nearly 40 years ago," he said, adding that he was surrounded by religious-based bigotry growing up in Northern Ireland during the Troubles.

Neeson admits that his reaction to the rape was wrong, but he maintains that he would have gone looking for revenge no matter the rapist's race.

"If she'd had said an Irish or a Scot or a Brit or a Lithuanian, I know it would have had the same effect," Neeson said. "I was trying to show honor, to stand up for my friend in this terrible medieval fashion."

Neeson said, ultimately, he brought up the experience because he wants society to be more open and discuss these difficult topics.

"We all pretend we're all kind of politically correct," he said. "You sometimes just scratch the surface, and you discover this racism, this bigotry, and it's there."

Neeson reflected on his experience shooting Schindler's List in Poland in the 1990s. He said his driver made anti-Semitic comments as he was being taken to the set.

"I'm thinking to myself, 'Am I hearing this right?'" he reflected. "This guy is making anti-Jewish comments to me, who's playing Oscar Schindler."

Neeson agreed with Roberts' comment that going out and looking for a fight is not the way to solve problems.