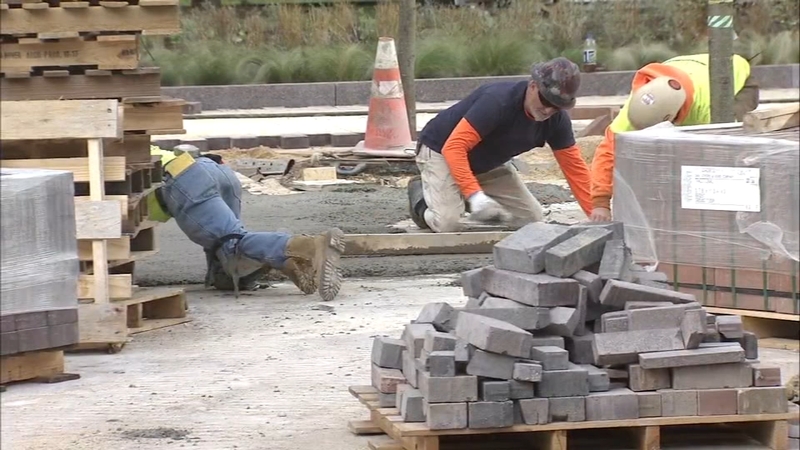 PHILADELPHIA (WPVI) -- Vendors from near and far and across the world are setting up for Thursday morning's opening of the Christmas village in Love Park.

It is the 10th anniversary year, and at least 100 vendors with booths reserved, all fenced in on the park's north side will be there.

Outside the fenced in area, the heavy rehab construction work continues on the bulk of the park.

Clearly the project won't be completed for 9 a.m.Thanksgiving Day, and some of the merchants who've come here in Christmas' past are not happy.

They came here thinking the park would be entirely ready for the holiday shopping period, Thanksgiving to Christmas Eve.

Jeffrey Horn of Allentown says, I'm not particularly happy about it. I cannot speak for everyone, but I cannot imagine people feel any different than I do."

"They thought they would be ready, but they're not. We have to deal with it," Ron Kauffman of Center City said.

The made in Philadelphia Holiday market is open and running on City Hall's west apron Dilworth Park, but the mayor and his staff have been watching the Love Park delays in completion with some concern and they have adjusted as best they can.

Mayor Jim Kenney said, "We expect it to be open by Thursday. There will probably be some remnants of construction or construction cleanup there, but it will be safe and accessible by Thursday and through the holiday."

Because of the construction, the scheduled preview weekend scheduled for last weekend was cancelled.

However, they issued a written statement saying the traditional open air German Christmas market will be open for business on time with plenty of access 9 a.m. Thursday.

Mike Sobkowiak from Pittsburgh said, "They say it's going to be ready. We will be ready. We're setting items up from Nicaragua to Costa Rica."