National NAACP to take over Philadelphia branch after post furor PHILADELPHIA -- Leaders of the Philadelphia branch of the NAACP have voted to turn over full control of the organization to the national office following a furor over the chapter's president posting an anti-Semitic meme to social media last month.

The Philadelphia Tribune reports that the executive committee of the Philadelphia NAACP branch voted Aug. 20 to effectively dissolve itself and yield full control to the national office, which will appoint an administrator by early September and oversee a transition to new leadership.

NAACP National President Derrick Johnson said in an Aug. 21 letter released Wednesday that all aspects of the local branch - including finances, policies, fundraising and membership - will run through the national office and the administrator appointed.

"We are extremely disappointed with the NAACP for excusing Mr. Muhammad's anti-Semitic posts and refusing to remove him," the Jewish Federation of Greater Philadelphia wrote on Sunday.

The decision all but ends the tenure of Rodney Muhammad as president of the local branch, which he has led since 2014. Jewish leaders, joined by Pennsylvania's governor and attorney general and several city leaders, had called for his resignation.

The image posted to Facebook July 23 included photos of Ice Cube, DeSean Jackson and Nick Cannon, all of whom have been criticized recently for posting or making anti-Semitic comments. Below their photos is an image of a yarmulke-wearing man, using his hand to crush a group of people. It's accompanied by a quote wrongly attributed to philosopher Francois Voltaire but actually circulated by white supremacists.

Muhammad said in a statement Wednesday that he welcomed the decision to have the national office "help us transition to new leadership and seek to make our relationship with faith communities across Philadelphia stronger than ever."

He apologized for the post and what he called "the insult, pain, and offense it brought to all, especially those of the Jewish community."

Muhammad earlier said he was unaware that the meme was anti-Semitic and removed the post when he learned that it "bared significant offense to the Jewish community."

A November election is slated for local NAACP offices, but it's unclear whether the national office will appoint new leaders or allow candidates to run in the election.
Report a correction or typo
Related topics:
societyphiladelphiadesean jacksonfacebooksocial mediaanti semitismnaacpjewish
Copyright © 2021 by The Associated Press. All Rights Reserved.
RELATED 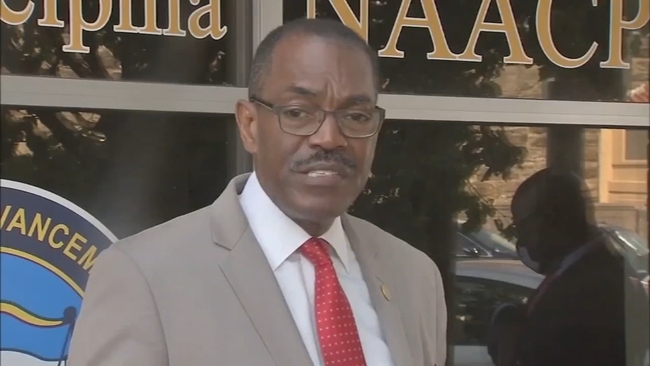 Philly NAACP president responds after calls for his resignation