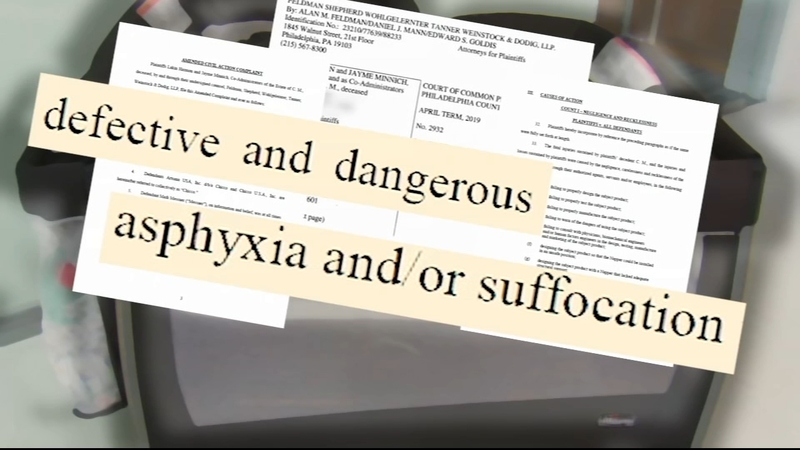 PHILADELPHIA (WPVI) -- A new federal rule has been approved in hopes of protecting babies when they sleep.

The Troubleshooters have been sounding the alarm specifically about inclined sleepers for years. And two years ago, a local mom shared her family's heartbreaking story to warn others.

"It can happen to anybody," said Lakin Harmon. "All I remember is him running up the stairs screaming."

Harmon said her son's dad, Jayme, had put the baby down for a nap when the unimaginable happened.

"I took him out of his arms and put his chest to mine and got him on the floor downstairs and started CPR while Jayme called 911," she said.

In a lawsuit, his parents allege an inclined infant sleeper caused their son's death.

"The baby's head is at an incline. The children can get into a chin to chest position where their head is down and to the side where they could asphyxiate and die," said Daniel Mann, an attorney with Feldman Shepherd.

When the Troubleshooters first reported the story, the Consumer Product Safety Commission had recalled five other inclined sleepers made by other companies, including 4.7 million Fisher-Price Rock 'n Plays.

But similar products, including the one Cayson died in, remained on store shelves.

Now the CPSC has approved a rule that effectively bans a range of infant sleep products:

It requires any product designed for infant sleep must "meet a federal safety standard" or "must be tested."

This will impact gear including, inclined sleepers, portable bassinets, and co-sleeping devices.

It's a move safety advocates have been calling for for years.

"Products that infants sleep in need to be tested for safety before they're sold, and it's backwards. We need to stop allowing companies to put them on the market, using our children as guinea pigs," said Nancy Cowles, who is a safety advocate with Kids in Danger.

But the new rule won't go into effect until mid-2022, so families need to continue to be vigilant.