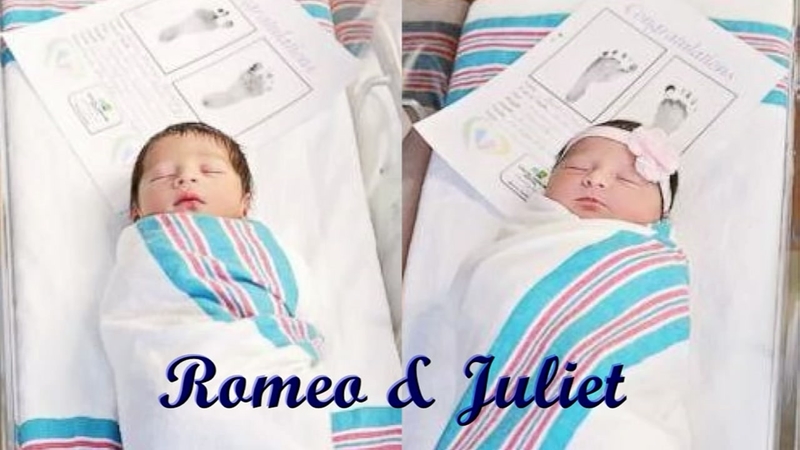 Romeo and Juliet were born 18 hours apart, delivered by the same doctor, in the same hospital.

Their parents had never met and had no idea about each other's chosen names.

"We had picked the name out months ago," Juliet's mom, Christiana Shifflett, of Bluffton, told ABC News. "We wanted a J name to go with our son's name, Jonas. We picked Juliet because we were watching the TV show 'Psych' and the character's name is Jules."

Romeo's parents, Morgan and Edwin Hernandez, also had their name chosen months ago.

"It's funny because we didn't even name him Romeo after Shakespeare," said Morgan. "We named him after a singer named Romeo Santos who my husband and I both love."
Neither family can believe the coincidence and both said "it's too funny" how this happened.

"Our kid's already famous and she's only a day old," Shifflett's husband, Allan Umana, said with a laugh.

Social media can't get enough of these tiny star-crossed babies who are going viral after the hospital's newborn photographer, Cassie Clayshulte, posted their precious photos to her Facebook page.

"Both parents had picked these names out early on in their pregnancies and neither couple knew each other until they met today!" she wrote in her post Monday, which quickly racked up more 3,000 likes. "Both babies have full heads of hair and already make the cutest couple!"

Romeo and Juliet's parents mentioned they'd like to try to get the babies together for their first birthdays to have a Shakespeare-themed photo shoot.
And Clayshulte says she's also got big plans for their future.