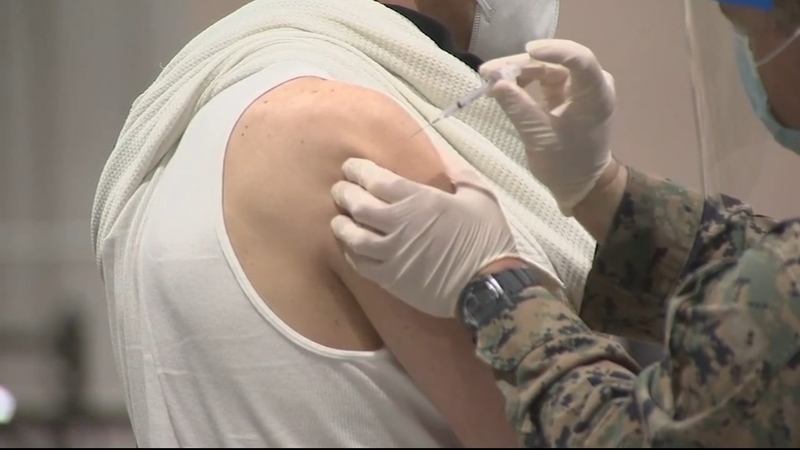 Meanwhile, in Philadelphia, lawmakers are appealing to federal officials to keep the support going for the FEMA sites in the city.

"They got me in August, and I called back again, and they got me in sooner," said Peggy Haggerty of Gloucester City, N.J.

Traci Forchion of Sicklerville, N.J. had a vaccine appointment in Gloucester County later this month, but when she heard Camden County had open appointments, she decided to try her luck.

"I walked in and asked, 'Can I get an appointment?' They asked me if I can come tonight. So I'm coming back at 4:30 p.m. to get the Johnson & Johnson shot," said Forchion.

Camden County officials learned last week they would have 13,000 doses of the vaccine, where they would typically have two to three thousand.

To use all of them, they extended clinic hours and started marking phone calls.

"We opened availability to people who are just looking for an appointment now. We called people with existing appointments to get them moved up. We reached out to our partners in the community, our senior housing," said Camden County assistant public health coordinator Caryelle Lasher.

Atlantic County's mega-site also had a surplus of appointments open up this week, thanks to an unexpected shipment of Johnson & Johnson vaccines.

Officials from AtlantiCare say they still have appointments available.

"When the governor increases and opens the eligibility on April 19 for all over 16 for Pfizer, we'll have those doses, and we certainly do have appointments available for everyone," said Sherrie Bragg, clinical facility manager for the Atlantic County mega-site.

In Philadelphia, as a second FEMA site held a soft opening on Thursday in North Philadelphia, the site at the Pennsylvania Convention Center is set to close as of April 26, according to a city health department spokesperson.

The city health department has requested an extension.

On Thursday, several members of Congress sent a letter to the White House Coronavirus Response coordinator, asking for continued assistance, saying in part: "Philadelphia has been hit hard by this pandemic. It is imperative for Philadelphia and for the Biden Administration's effort that this site continues operating in order to open vaccine eligibility to all adults by May 1st."