WPVI
By Katie Katro
PHILADELPHIA (WPVI) -- Demonstrators in Philadelphia are working to seek justice without violence.

Hundreds gathered around the statue of Octavius Catto on Sunday on the south side of City Hall.

Catto holds a special place in city history, as one of the most influential African American leaders in 19th century Philadelphia.

"Kind of overwhelmed with the energy in a good way," Lloyd Emelle of Kennett Square, Pennsylvania said.

People of all races and ages gathered to call for an end to social injustice.
"Hopefully the teenagers in this world can stand up and make a change because I think Gen Z is a very powerful generation and we've come through a lot and I think is just the beginning," Faye Joseph of Newtown, Pennsylvania said.

Joseph showed up with her 16-year-old friends.

Some of the protesters said they attended Saturday's peaceful demonstration, as well.

"It was great until the renegades came in and they changed the whole mood, but today was just as nice as yesterday started off ," Tina Russell of North Philadelphia said.

Demonstrators felt this protest was a second chance to seek justice without violence.

"We don't get to leave. The violence, we pay for it," Coco Spencer of Center City said.

Philadelphia's District Attorney Larry Krasner said he is having a constructive collaboration with the police department and wants to make sure everyone's constitutional rights are upheld.

"Just as the police department collects information when civilians believe a police officer has been out of line, we also collect that information and we have a special investigation unit and that investigates the possible crimes or misconduct committed by police," Krasner said.

Many people said they hoped the day was not just about posting on social media to say you were at a rally, but to enact change in your communities.

"A Quest for Parity: The Octavius V. Catto Memorial" was uvneiled on the southwest corner of Philadelphia City Hall in 2017. Catto was a scholar, educator, Civil Rights activist, and athlete.

"Catto became an adamant activist for the abolition of slavery and establishment of equal rights for all men, regardless of race. He successfully fought for the desegregation of Philadelphia's public trolleys and ratification of the 15th amendment to the Constitution, which bars voting discrimination on the basis of race. In addition to his work as a Civil Rights activist, he was also an educator, scholar, writer, and accomplished baseball player - helping to recognize Philadelphia as a Negro baseball league focal point," the Association for Public Art said.

"Catto was only thirty-two when he was shot and killed outside of his home on Philadelphia's South Street on October 10, 1871, the first election day that African Americans were allowed to vote. His activism and efforts to get African Americans to the polls led to his murder - a violent action that was seen as a result of widespread intimidation by whites to deter the black vote."
Report a correction or typo
Related topics:
societyphiladelphiaprotestsocietycommunity
Copyright © 2020 WPVI-TV. All Rights Reserved.
PROTEST 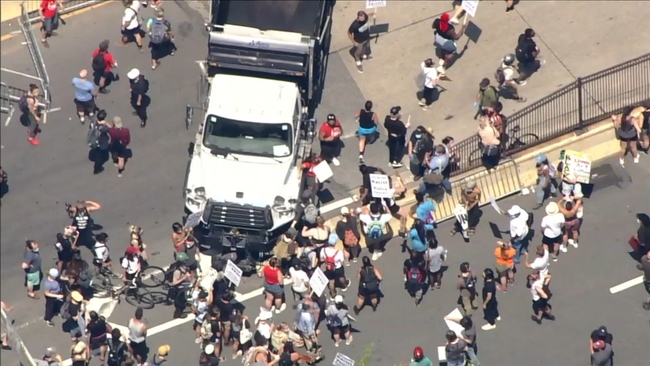 Part of 676 temporarily shut down as protesters march on highway