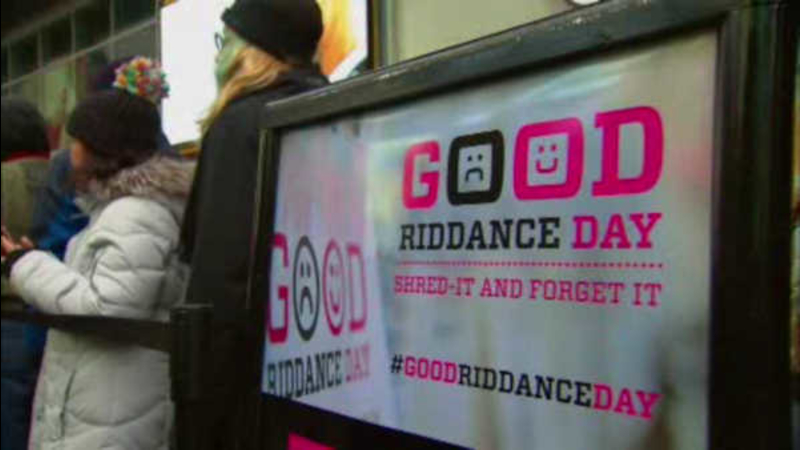 TIMES SQUARE, Manhattan -- With the most recent string of celebrity deaths, including George Michael and Star Wars star Carrie Fisher, as well as a year marked by controversial events, many around the world are ready to say goodbye to 2016.

New York City kicked off the New Year festivities early with the 10th Annual Good Riddance Day in Times Square Wednesday. Organizers handed out paper for participants to write down bad memories, jokes and experiences to shred and forget, and even offered a hammer to smash small symbolic items and start from scratch, literally, in the new year.

Watch video from the event here:

The Times Square Alliance and Countdown Entertainment, the co-organizers of Times Square New Year's Eve, put together the event for the tenth consecutive year. Arlene Roberts, a breast cancer survivor, was chosen as the winner of the 2016 Good Riddance Day contest. She was on-site Wednesday to shred her wig as a symbol of her conquering of breast cancer, accepting who she is and welcoming a fresh and healthy new start in 2017.

As the old saying goes "out with the old and in with the new," Times Square Alliance is also encouraging people from around the world to submit their good wishes and resolutions for 2017 to the Wishing Wall.