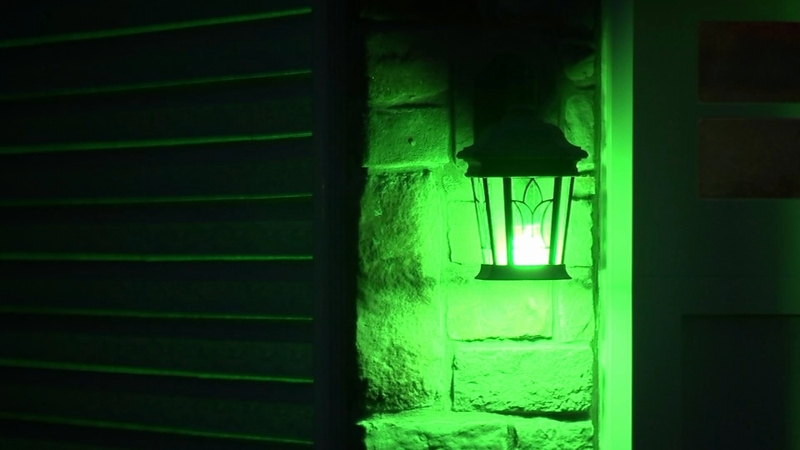 HAVERTOWN, Pennsylvania (WPVI) -- Residents in Havertown, Delaware County and across the country are lighting their homes green for three teens battling cancer.

"Everybody's house in Havertown has green lights up and it's really awesome," said 15-year-old Lily Walker who is a freshman at Haverford High School.

Just last March, she was diagnosed with a brain tumor. Then she learned two other students, 18-year-old Jack Cloran and 16-year-old Hannah Hermansen, were also battling cancer.

"It was like my life was over, that was my first thought, my life's ruined," said Hermansen.

Understandably, family and friends were devastated. A few of them wanted to let the three know they were thinking of them by lighting a green light on their porch.

But then, something happened. A group started a Facebook page called 'Light Up Green For Hannah, Lily, Jack and anyone else fighting cancer!'

Before you knew it, there were green lights everywhere, and not just in Havertown.

No one could have imagined that anything like this would happen.

"I thought it was just gonna be for the friends but the fact that businesses have gotten involved and people we don't even know, people have been sending us messages saying that they're supporting our kids as they fighting this battle, it's heartwarming," said Lily's mom, Megan Walker.

Walker said she feels stronger after seeing the support - and the lights. Hermansen agreed.

"It created a brighter fire inside of me, that 'I can fight this, I'm gonna beat this.' There's so many people that are praying for me, that they're supporting me, people I don't even know," said Hermansen.

Hermansen is getting ready to go through radiation treatment. Meanwhile, Walker has an MRI scheduled for later this month hoping to see if her tumor has shrunk.
Report a correction or typo
Related topics:
societydelaware countyu.s. & worldcommunitycancer
Copyright © 2021 WPVI-TV. All Rights Reserved.
More Videos
From CNN Newsource affiliates
TOP STORIES