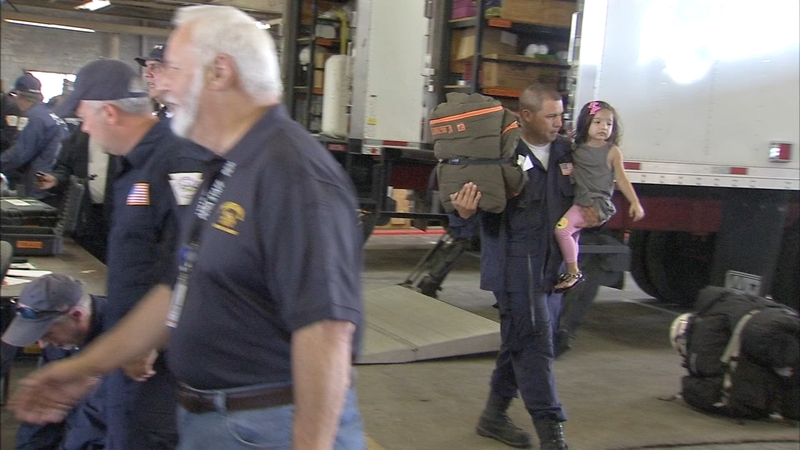 PHILADELPHIA (WPVI) -- The tears of joy flowed for Bridgett Herron the second she was wrapped up in her dad's arms.

She hasn't seen him in almost 3 weeks, and she sure missed him a lot.

Bridget Herron of Northeast Philadelphia said, "Seeing him for the first time even though 19 days isn't that long. But you don't know how much you need them until you don't have them for that long.

But the emotion wasn't just because of his absence. It's because of where he and all of the members of PA Task Force 1 members went.

That was straight into Hurricane Florence.

Laura Heron of Northeast Philadelphia said, "A lot of stuff was going through my mind but I knew he was going to be ok."

The team of almost 80 members came home today and were reunited with loved ones at their headquarters in Tacony.

That included some four-legged family members too.

It was all smiles today. But in South Carolina, the task force was busy, to say the least.

The heavy rains from Florence flooded many towns.

As a result, the team searched and evacuated 622 buildings and homes.

They rescued victims who were stranded

And say the resiliency of the people they helped was incredible.

Lexi Bassaro of the- Pennsylvania Emergency Management said, "What an honor to be able to help those people they were kinder to us than we could ever be to them their community were welcoming to us and happy to have us there."

Luckily, we can report all members made it back safe despite extremely dangerous situations.

But team members also say they'd go back if needed without hesitation.

Task Force One Leader Ken Pagurek said, "An emergency can happen at any time anywhere and being prepared as the Carolinas were it certainly enhanced our abilities to assist them."

Now while they were gone, the task force members say they sang happy birthday to a 3- year-old member's daughter back here in Philadelphia.

They did that true FaceTime.

Though it was nice to have communication nothing beats coming home and giving them that first hug.
------
Send a News Tip to Action News
Learn More About 6abc Apps
Report a correction or typo
Related topics:
societyphilly newshurricane florence
Copyright © 2021 WPVI-TV. All Rights Reserved.
More Videos
From CNN Newsource affiliates
TOP STORIES