Tulsa Race Massacre: Story behind Black Wall Street, racist mob that burned it to the ground 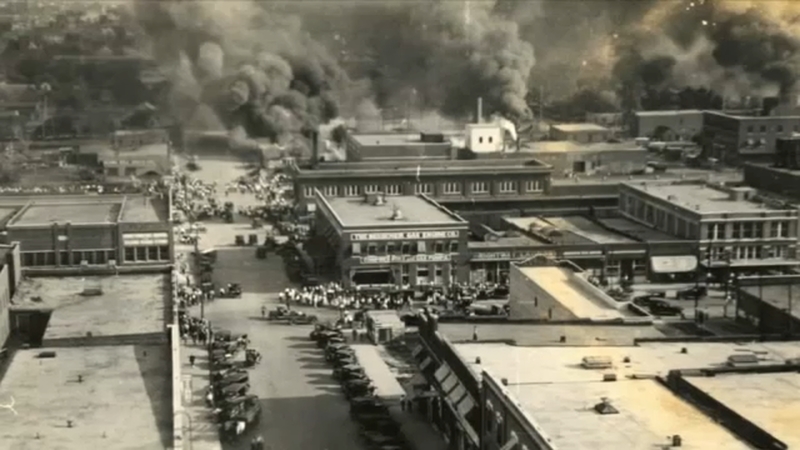 TULSA, Okla. -- One hundred years ago, one of America's greatest success stories came to a crushing end.

At the turn of the 20th century, the Greenwood District of Tulsa, Oklahoma, was more than 35 city blocks of thriving shops, hotels, theaters and more. And all of them were Black-owned.

The district was founded by Black men and women -- many of whom were descendants of slaves -- and it became known as Black Wall Street.

Greenwood was home to doctors, lawyers and entrepreneurs. For years, it was a beacon for African-Americans looking to escape the discrimination and violence of the Jim Crow South and live a peaceful and safe life.

But even in Greenwood, not everyone was safe. Racial tensions and violence with the neighboring White residents in Tulsa boiled over. And, on May 31, 1921, a race massacre ensued, killing hundreds of Greenwood's residents and leaving the district in ashes.

Black Wall Street had been burned to the ground.

Viola Fletcher, 107, and Hughes "Uncle Red" Vann Ellis, 100, both survivors of the Tulsa Race Massacre, are calling for justice and acknowledgment of a painful past.

The foundations of the Greenwood District and Black Wall Street were built in the 1830s, when African-Americans first migrated to Oklahoma.

Many Black people had arrived as slaves to the Native American members of the Chickasaw, Choctaw, Cherokee, Creek and Seminole tribes -- who were forced to relocate from the Southeastern US to Oklahoma Territory as a result of President Andrew Jackson's Indian Removal Act.

Following the end of the Civil War in 1865 and the ratification of the 13th Amendment, which called for the abolition of slavery, African-Americans were granted citizenship and allotted plots of land where they could begin their new lives as free men and women.

This land allocation led to a boom in all-Black towns, including Greenwood. Between 1865 and 1920, the number of all-black towns and settlements grew to more than 50. Today, only 13 all-black towns exist, according to the Oklahoma Historical Society.

To help these towns grow and attract new residents, some people took on the role of "boosters," encouraging the migration of other African-Americans seeking to escape the racial violence of the South. Oklahoma Territory, they would say, was a utopia for opportunity and freedom for Black people.

One of these boosters was Edward P. McCabe, a former politician and state auditor of Kansas. McCabe's dream was to create an all-black state in the Oklahoma Territory that was run by and for Black people. McCabe founded the town of Langston in Oklahoma and a newspaper, the Langston City Herald. He used the publication as a tool to promote his ideas about a black statehood.

While McCabe's dream never materialized, it further fueled the creation of all-black towns in Oklahoma Territory, one of which would become known as Greenwood.

State archaeologist Kary Stackelbeck and Tulsa Mayor discuss the discovery of at least 10 bodies in an unmarked mass grave at a Tulsa cemetery where investigators are searching for remains of victims of the 1921 Tulsa Race Massacre,

The birth of Black Wall Street

It all started with 40 acres and a grocery store.

Ottawa W. Gurley, better known as O.W. Gurley, was one of Tulsa's earliest settlers. Gurley, traveled to the oil rich city of Tulsa in 1905 from Arkansas and purchased 40 acres of land, on which he built the People's Grocery Store and a one-story rooming house.

The district's enterprising residents built their businesses for Black people, who were often barred or treated poorly in the nearby White establishments.

Stringent segregation laws had gone into effect after Oklahoma became a state in 1907. This paved the way for Greenwood to become an insular hub for the Black dollar to circulate, historians say. Many of the Black residents earned and spent their money entirely within the confines of Greenwood. The result was one of the most affluent and wealthiest African-American enclaves in the country.

Among Greenwood's most prominent residents was J.B. Stradford. The son of an emancipated slave, Stradford was a lawyer who amassed his fortune through real estate. Among his many properties, he built the opulent Stradford Hotel, complete with 54 rooms and crystal chandeliers, providing a welcoming space for Black visitors.

John and Loula Williams built and operated an auto repair garage, a confectionary, and a rooming house. But they were best known for building the famous Williams Dreamland Theatre, which featured silent films and live musical and theatrical revues that regularly attracted Black audiences.

Simon Berry started a jitney service that catered to Greenwood's Black community, who were barred from using White taxi services. He also owned a hotel and started a bus service and, as an experienced aviator, founded his own airline charter.

"Greenwood wasn't just a place, but a state of mind. They had built this place, they had created it. It wasn't a gift from anyone, it was their own community," said Scott Ellsworth, a University of Michigan historian and author of "The Ground Breaking: An American City and Its Search for Justice," who has been working on an effort to discover the unmarked graves of the Tulsa massacre victims."In Greenwood, everybody knew they were just as good as anyone else."

But not everything was going well in Greenwood. Tensions between the Black and White residents of Tulsa had started rising. Whites had grown resentful of the Black wealth and success of the residents of Greenwood District, according to Mechelle Brown, director of programs at the Greenwood Cultural Center.

It all started after an elevator encounter between a 17-year-old White woman named Sarah Page and a 19-year-old Black man named Dick Rowland. It was alleged that Rowland had assaulted Page in the elevator, which he denied. But it didn't matter. News of a Black man's alleged assault of a White woman spread like wildfire throughout the White community of Tulsa and tempers flared.

Black residents rushed to the Tulsa County Courthouse to prevent Rowland's lynching, while White residents were deputized by the Tulsa Police and handed weapons.

A White mob, estimated to include some 10,000 people, descended upon the Greenwood District. Over the next 12 hours, the city of Greenwood experienced an all out assault of arson, shootings and aerial bombings from private planes. By the morning of June 1, 1921, Greenwood had been destroyed.

It would eventually be known as the Tulsa race massacre.

"The race massacre was a part of American culture and lynching culture of the time. However, the scope and the scale of the violence and destruction was unprecedented," said Karlos K. Hill, associate professor and chair of the Clara Luper Department of African and African American Studies at the University of Oklahoma and the author of "Beyond the Rope: The Impact of Lynching on Black Culture and Memory."

Buck Colbert Franklin, a lawyer who lived in the Greenwood District at the time, recounted what he witnessed of the massacre in a 10-page manuscript that was found in 2015, "I could see planes circling in mid-air. They grew in number and hummed, darted and dipped low," he wrote. "I could hear something like hail falling upon the top of my office building. Down East Archer, I saw the old Mid-Way hotel on fire, burning from its top, and then another and another and another building began to burn from their top."

Franklin wrote that he then left his office, locked the door and descended to the foot of the steps.

"The side-walks were literally covered with burning turpentine balls. I knew all too well where they came from, and I knew all too well why every burning building first caught from the top," he continued. "I paused and waited for an opportune time to escape. 'Where oh where is our splendid fire department with its half dozen stations?' I asked myself. 'Is the city in conspiracy with the mob?'"

All 35 city blocks of the Greenwood District were completely decimated.

The Red Cross reported that 1,256 homes and 191 businesses were destroyed and 10,000 black people were left homeless. And it's believed that as many as 300 people were killed, according to the Tulsa Historical Society and Museum.

Survivors were left with nothing after their homes were looted and $2.7 million in insurance claims were denied, according to a 2001 state historical commission report.

Another research report out of Harvard University estimated that, in 2020 dollars, total financial losses were between $50 and $100 million.

For decades to follow, accounts of what happened in the summer of 1921 would remain largely unknown.

But the massacre didn't mark the end for Greenwood. Black Tulsans rebuilt the community, and by 1942, the Greenwood District was home to more than 200 Black-owned businesses, according to the Oklahoma Historical Society.

Mabel B. Little, who owned a salon in Greenwood before the massacre, described the rebuilding efforts in her 1990 memoir, "Fire on Mount Zion: My Life and History as a Black Woman in America."

"In the end, we didn't get hardly any help from the white community. We had to save our own, use what small means we had and cooperate together. ... Little by little, we built our businesses back up - beauty shops, our drug stores, grocery stores, our own barbershops, tailor shops, you name it."

But urban renewal and the eventual construction of an interstate highway would lead to another devastating blow to the area. Businesses dwindled and Black families moved further North.

Today, only 10 buildings remain in the historic Greenwood District.

In the 100 years since the Tulsa race massacre, there have been various efforts to rebuild and support Black entrepreneurs in the Greenwood area and address the historical violence that ensued in 1921.

In 2018, the search for possible mass graves from the Tulsa race massacre was initiated. There have been at least 10 bodies discovered since the search began.

In 2020, a lawsuit was filed by a group of Oklahomans demanding reparations for the 1921 race massacre. The suit is led by a 106-year-old survivor Lessie Benningfield "Mother" Randle, who was a little girl when the massacre took place. The lawsuit is still pending.

Other efforts underway include a $1 million fundraiser to rebuild Tulsa's Historic Greenwood Commercial District led by Stevyn Turner and Freeman Culver on behalf of the nonprofit Greenwood Community Development Corporation.

According to Turner and Culver, the goal of the fundraiser is to "rebuild the North Tulsa community one business and one job at a time."

Another initiative is Black Tech Street, founded by Tyrance Billingsley II, which seeks to offer education and opportunities to aspiring Black entrepreneurs and innovators in the area.

"[Greenwood] ... what it did have, and even still has today is an entrepreneurial spirit and resourcefulness. That is what allowed it to grow and become the Black Wall Street of America," said Hill. "It speaks to Greenwood as a symbol of Black excellence as well as the impressive growth of the community."