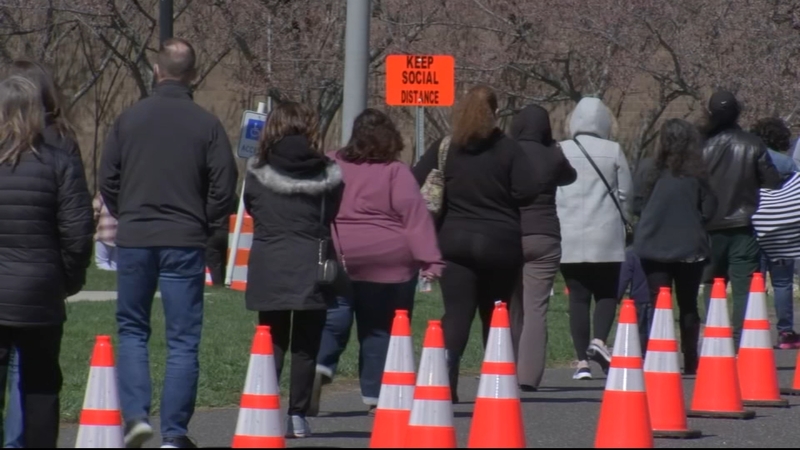 TRENTON, New Jersey (WPVI) -- New Jersey reached the milestone of four million vaccine doses administered as of Monday, according to Gov. Phil Murphy. This comes as more people are now eligible to be vaccinated in the Garden State.

As of Monday, the following groups are eligible for vaccination in New Jersey:

Eligibility will expand in New Jersey on Monday, April 5 to include:

Gloucester County's megasite has been administering more than 6,000 shots per day according to county officials.

Jackie Moore, 84, of Winslow Township, received her first dose at the megasite on Monday. She wasn't sure she wanted to get vaccinated at first.

Her daughter is relieved not just that her mom is vaccinated, but that more people are eligible, too.

"The more people get it the faster we can get through this. We need everybody to please, please get it," said Deana Watson, Jackie's daughter.

General outdoor gathering limits will be raised to 200 people.

"The reason we are increasing the outdoor limit is that as the weather gets warmer we are urging everyone to engage in social activities outside whenever possible," said Murphy.

Health officials say they are working to increase the amount of variant testing they're doing, suspecting the new strains are playing a role in increasing case numbers - among other factors.

"It's the fatigue, it's the location, it's how densely populated we are, it's our neighborhood with New York City right across the River. And yes I think the variants are playing a role as well," said Dr. Edward Lifshitz, adding the state is currently testing about 2% of positive results for variants.

Health officials stressed people still need to take precautions like mask-wearing even after they're vaccinated.

"There seems to be people who are pivoting in their mind, 'I'm vaccinated. Boom, I can go.' But that's really not so," said New Jersey Department of Health Commissioner Judy Persichilli.