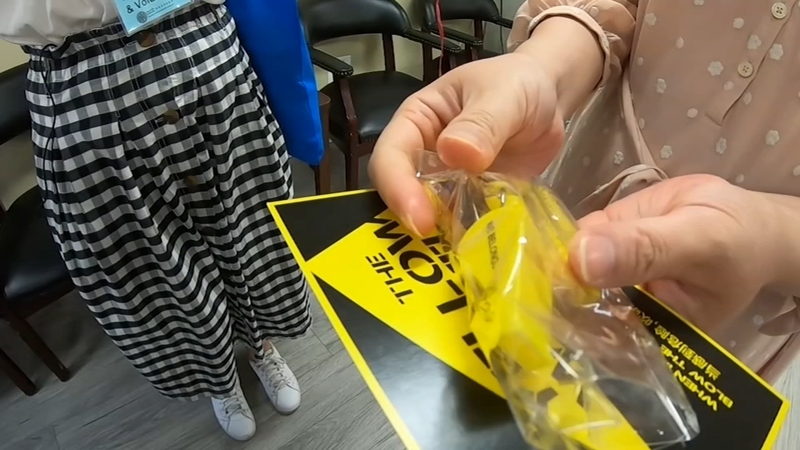 PHILADELPHIA (WPVI) -- As a group of four people walked the streets of Chinatown Tuesday, they did so with a mission: equip residents and business owners with a tool that could help protect them against attacks.

"We want people to number one to feel like they have tools to protect themselves and be safe," said John Chin, executive director of the Philadelphia Chinatown Development Corporation.

Volunteers with the organization went down the streets of Chinatown on Tuesday, handing out whistles that people can use to alert those around them of an attack.

The idea is part of The Yellow Whistle Campaign. It's a nationwide program that began in New York City when co-founder Li-En Chong saw so many disturbing attacks on Asian community members.

"We said 'we need to do something,'" said Chong, who moved to the U.S. in 2015. She and a friend were so appalled by the attacks, they co-founded The Yellow Whistle Campaign, which has distributed more than 500,000 whistles to people across the country, including thousands in Philadelphia.

"Certainly, The Yellow Whistle Project is another visible sign of this solidarity," said Ken Yang of Penn Asian Senior Services.

"If they feel they are in danger, they can blow the whistle for help," said Chin.

Chong says the name behind The Yellow Whistle is very intentional and meant to empower the Asian community.

"Yellow is not a negative color. It should not be. It should be a positive color, and we want to take it back," she said.

The whistles don't just make a sound; they send a message, with two simple words printed on the side of each whistle: 'We Belong.'