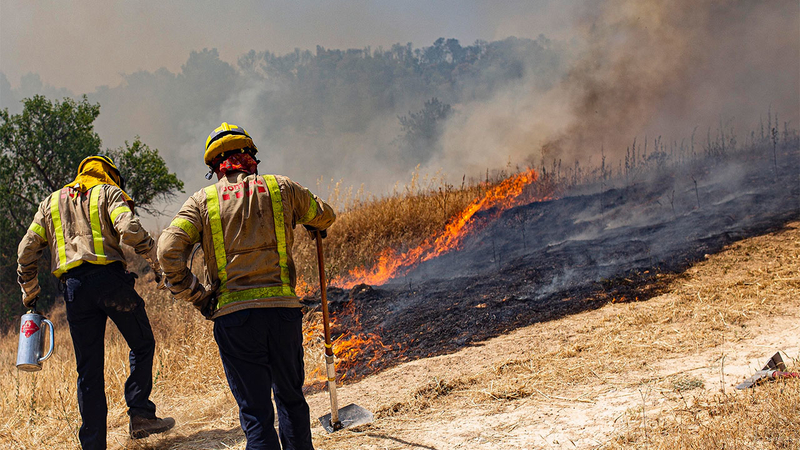 MADRID -- Firefighters and aircraft battled for a third straight day Friday to contain a major wildfire that started in a pile of chicken dung and raced across the hills of northeastern Spain amid a heat wave.

Authorities said more than 700 firefighters, eight helicopters and six water-dropping aircraft aimed to slow the fire's progress until nightfall, when cooler temperatures might give them an advantage.

A stiff breeze was driving the flames in the direction of Lleida, 19 miles away, though officials said the city wasn't considered to be under threat.

Temperatures in the area of the fire reached 106 F as parts of Europe recorded their hottest June temperatures in recent memory due to hot air moving north from Africa.

Temperatures were forecast to drop from Saturday.

Authorities said the fire is the Catalonia region's worst fire in two decades and 50,000 acres of hilly terrain are at risk. By Friday, an estimated 6,000 hectares had burned.

Fire investigators believe the blaze started with the spontaneous combustion of a pile of chicken manure on a livestock farm.

Chief Inspector Josep Antoni Mur told a news conference Thursday that the pile grew hotter as it fermented, and then flames were blown into the surrounding vegetation, private news agency Europa Press reported.

He says fire services are at full stretch "and we can't allow another wildfire to break out."

Authorities were caring Friday for more than 50 people evacuated from the previous day. They included locals as well as people from Britain, Belgium, Germany, Brazil and the United States, according to Europa Press.