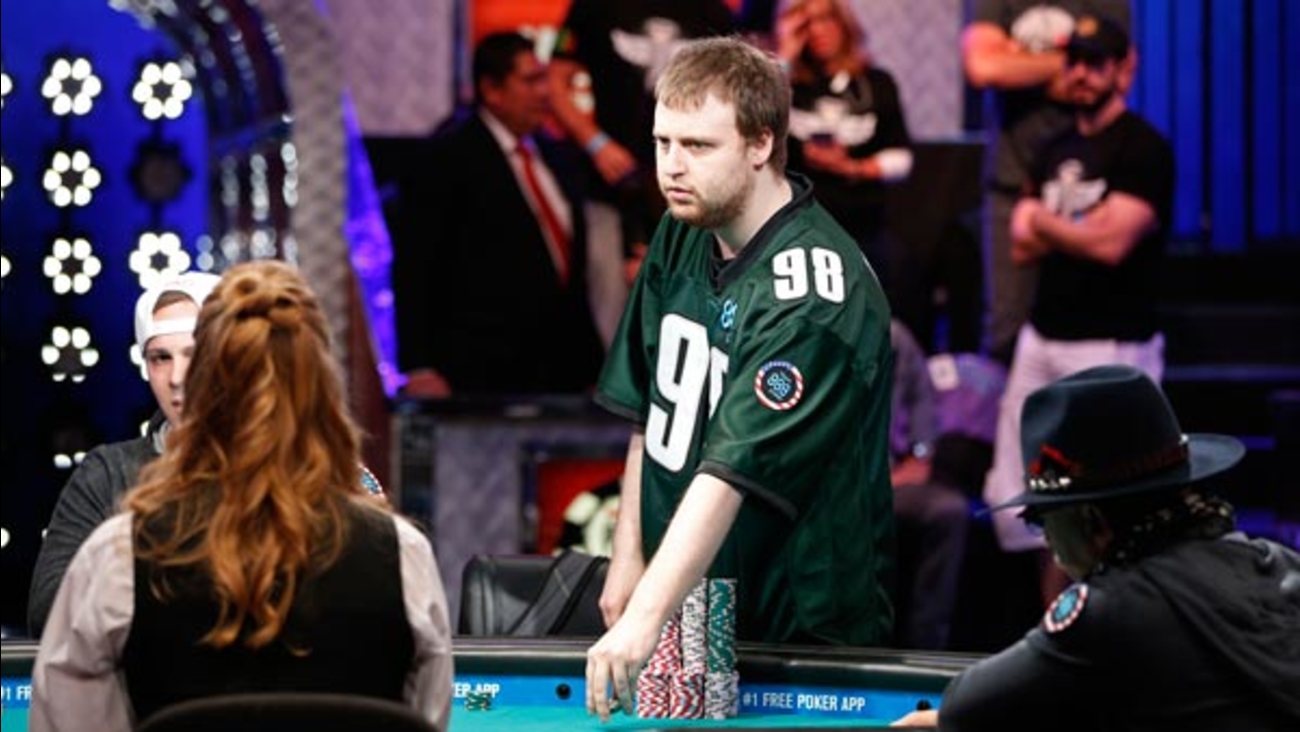 Joseph McKeehen stands at his seat at the World Series of Poker Sunday, Nov. 8, 2015, in Las Vegas. (AP Photo/John Locher)

Nine players are left, each hoping to win $7.6 million and the title of World Series of Poker champion in the event's annual no-limit Texas Hold 'em tournament that returns Sunday through Tuesday.

Three of those players are from our area: 24-year-old Joseph "Joe" McKeehen of North Wales, Pennsylvania, 23-year-old Tom Cannuli of Cape May, New Jersey, and 25-year-old Joshua Beckley of Marlton, New Jersey.
23

The group of poker pros, retirees and software developers managed to outlast, outwit, out-luck nearly 6,410 other players who each paid $10,000 for the chance.

Here's more information about the local guys and their competition (players in order of their finish going into the final table):

McKeehen is no stranger to championships, having won a Hasbro-sponsored "Risk" world championship when he was 10 years old. He graduated with a math degree from Arcadia University, a small private school outside of Philadelphia, in 2013. McKeehen spent part of his four-month break adding another $90,125 to his bankroll winning first in the Wynn Fall Classic main event. He's placed first in 12 events before now. Sitting comfortably at the top of the nine-person heap, McKeehen claims he's done "a whole bunch of nothing" during the break otherwise. He has more than twice the number of chips as his closest competitor.

Occupation: owner of multiple tech companies and a software developer

Stern is a relative unknown in the tournament poker world, having only earned $22,318 in World Series of Poker competitions since 2006 and placing no higher than 18th in five World Series of Poker events. He's played most of his poker online. He's one of the only "November Nine" members with a day job, as a software developer. He almost missed his chance at the main event, too. After competing in The Colossus and a limit Hold 'em event, he flew back to Israel but then changed his mind, catching a new flight back to Las Vegas in time to enter and play all the way to second place when the chips settled in July.

For a game filled with young men, Blumenfield is a relative anomaly. He and fellow November Niner Pierre Neuville are the oldest competitors to reach the final table in its modern era. The U.C. Berkeley grad who holds a bachelor's in political science and a master's in methodology and comparative communism said it was a course involving computers and statistics that was a life-changer for him, leading him to co-found a company called Elastic Intelligence that he sold to Intuit in June 2013. After being laid off from his tech company job shortly before the main event's start in July, Blumenfield said he's done with tech work and ready to play more tournaments.

Shortly before his Main Event streak, Neuville had already won a lifetime achievement award at the European Poker Awards in 2015. The PokerStars.com sponsored player has become known on the site for clinching spots in live tournaments via satellite contests he frequents online. He's earned $591,460 in World Series of Poker events since 2008.

From: Fairfield, Iowa, now Las Vegas with Washington, D.C. in between

Steinberg has daily fantasy sports to thank for his berth into the main event contest and his return to poker playing. The man who eschews the usual hoodie, sunglasses fashion combo that's a familiar site in the poker world for tailored suits instead, won a DraftKings contest that awarded entries into poker's premier event in July. Steinberg's background includes growing up in a transcendental meditation community in Iowa. He doesn't meditate as much as he used to, once or twice a week, but he has been living a healthier lifestyle ahead of the tournament's return.

From: Cape May, New Jersey

The youngest November Niner this year skyrocketed from placing 691st in the Main Event last year to 6th today. He has a recognizable entourage of poker pros watching his every move and who will be in his ear come Sunday including Antonio Esfandiari and Jeff Gross. But it may be the friends no longer alive who will be closest to Cannuli during his effort to earn a place in poker history. Cannuli plans to wear wristbands with the names of three friends he's lost in three years to car accidents and illness.

Beckley kept busy during the World Series of Poker tournament playing in 15 events and winning cash in five of them, more than anyone else that remains at the table. His biggest win until now was a first place prize last year at the Parx Casino Big Stax no-limit Hold 'em worth $98,348.

The fourth time's the charm for Chan who has entered the Main Event every year since 2012 and never cashed, until now. The newly minted millionaire turns 27 at the end of the Main Event week.

Butteroni was nearly as busy as Beckley during the World Series of Poker tournament, playing 13 events and cashing in three including the Main Event. Poker pro Daniel Negreanu is a fan of many of the November Nine calling them classy guys. As for Butteroni, "he's got a lot of passion."