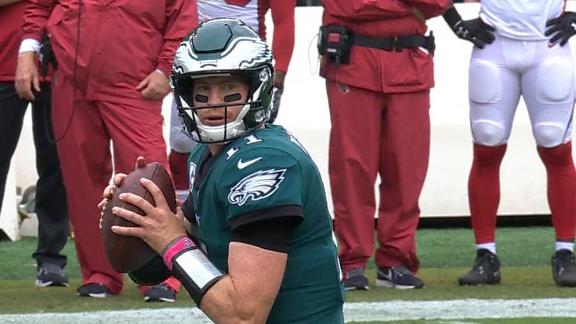 DETROIT -- A thousand miles northeast of Arlington, Texas, where the Cowboys and the Packers were re-legislating last year's NFL playoff thriller, two teams engaged each other here at Ford Field on Sunday with designs on joining them.

Yeah, I know the Lions were in the 2016 playoffs, but not long enough that you didn't have to think about it to be sure, right? And the Panthers took last season off from the playoffs, after reaching the Super Bowl the year before. Both teams are trying to muscle their way into NFC title contention in 2017. It was Carolina that took another step in that direction on Sunday.

"We've got to find ways to keep maximizing our opportunities," said winning quarterback Cam Newton, who was a dazzling 26-for-33 for 355 yards and three touchdowns in Carolina's 27-24 victory.

"We've got to find a way to do a better job on offense, especially in the game," said Stafford, who led two fourth-quarter touchdown drives that amounted to too little too late.

It's no longer so early in the season that we can't draw meaningful conclusions about these teams, yet it's early enough that "We've got to find a way" might be the rallying cry for squads in a jumbled NFC playoff picture.

The Panthers are 4-1. Their only loss was to the Saints, who are 2-2. What does it mean if the Lions, now 3-2 after losing to the Panthers, beat the Saints next Sunday in New Orleans? What does it mean if they don't? The Lions have got to find a way to win that game, since the Packers keep stacking miracles and sit one game ahead of them at 4-1 in the NFC North. The Vikings might not have to work too hard to find a way to get to 3-2 on Monday night against fresh-faced Mitchell Trubisky in his debut for the Bears.

The Eagles are 4-1, two full games clear of the NFC East, after Aaron Rodgers ripped the Cowboys' hearts out on their home field for the second time in 10 months. Philly's only loss was to the Chiefs, who entered Sunday night's game undefeated. The Eagles are 2-0 in the division, 3-0 in conference and sitting pretty. The 2-3 Cowboys have got to find a way to catch them. Washington is at 2-2, and it had the week off.

The Seahawks found a way to beat the upstart Rams on Sunday. The Rams are never easy for the Seahawks, and Seattle has been ignoring the check engine light on its offense for a year and a half now. But it's tied with Jared Goff & Co. at 3-2 now, one game ahead of sputtering Arizona, and who knows what's to come in that NFC West race?

The Panthers know what it's like to be a part of the NFC playoff picture. They made the postseason three years in a row from 2013 to 2015 and just about ran the table two years ago, losing only to the Falcons in Week 16 and the Broncos in the Super Bowl. They have a veteran team full of guys who were part of that 2015 run, and they know the feeling. But they were humbled by last year's 6-10 flop, so they're not getting too excited about a 4-1 start just yet.

Find a way. The Panthers are 4-1 and a half-game in front of the defending NFC champion Falcons, who had the week off. The Saints and Buccaneers are at 2-2, and there's only been one intradivision NFC South game so far. The next one isn't until Week 8. No way at all to know how that division will sort itself out, but in the meantime, Carolina fires the measuring stick right back up again Thursday night, hosting those 4-1 Eagles in what could be an NFC playoff preview but yeah it's still too early to tell.

"There's still a lot to work on," said Panthers rookie running back Christian McCaffrey, who had his first NFL touchdown on Sunday. "Every day is about finding a way to get better. The positive thing is we're 4-1 and we know we can be a lot better."

It's all about finding a way. The Panthers and the Lions met here Sunday with each trying to find its way back to the NFC playoffs. The early part of the season has shown that each has the defense to do it but needs to work on the offense. The Panthers' offense has found a way to stack two good games in a row, so they're 4-1 and the Lions are 3-2. Will they meet again? They could find a way.

Carson Wentz continues to impress
After throwing four touchdowns and leading the Eagles to another win, Carson Wentz has established himself as force at the quarterback position.

Wentz tosses 4 TDs against the Cardinals
Carson Wentz throws a career-high four touchdowns Sunday as the Eagles dominate the Cardinals.