49ers: 'No response' to Jim Harbaugh 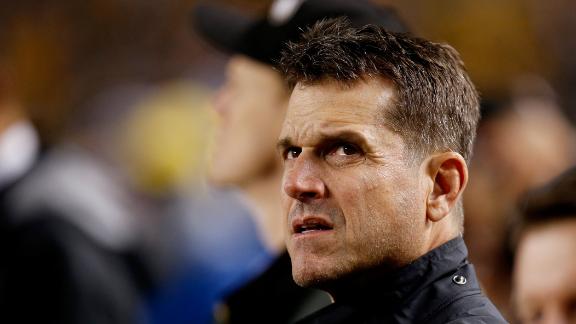 When he took to the podium Wednesday morning at the NFL combine,San Francisco 49ers general manager Trent Baalke had "no response" to former coach Jim Harbaugh's parting shot of late last week.

"We've moved on," Baalke said. "He's got a heck of a job [at Michigan]. We've got a new head football coach. We're trying to get ready for the draft, free agency and the offseason program.

"Jim did a heck of a job. He's a heck of a coach. I think, once again, he's gone his direction, we've gone ours. I feel very good about the direction we're headed and I'm sure he does as well."

Harbaugh told the San Jose Mercury News on Friday that the purported "mutual parting" between team and coach after four years, three NFC title games and a Super Bowl appearance was anything but an amicable divorce when the team announced his departure the night of the Niners' season finale on Dec. 28.

"I was told I wouldn't be the coach anymore," said Harbaugh, who had one year remaining on his contract at the time. "And then ... you can call it 'mutual,' I mean, I wasn't going to put the 49ers in the position to have a coach that they didn't want anymore.

A day after the Niners' season ended, though, Harbaugh found a safe landing spot in Ann Arbor. It took the 49ers more than two weeks to name Jim Tomsula the 19th coach in franchise history when they promoted him from defensive line coach.

Baalke, who was speaking publicly for the first time since Tomsula's introductory news conference on Jan. 15, was asked about Harbaugh's assertion that he was actually forced out in Santa Clara.

"Once again, he's moved on, we've moved on and I think the important thing for us now is just to look forward and that's what we're trying to do," Baalke said. "We've got three important things happening here coming up, and I know that's where my focus is."

The Mercury News also reported that Adam Gase, the former Denver Broncos offensive coordinator who was believed to be the front-runner for the Niners job, balked at the 49ers' making it a condition that Gase hire Tomsula as his defensive coordinator.

"I didn't read the reports, so I'm not real familiar with what you're talking about," Baalke said. "But, the job for the 49ers was offered to one person and one person only, and that's Jim Tomsula."