5-on-5: Do the Rockets really have a chance in a Warriors series? 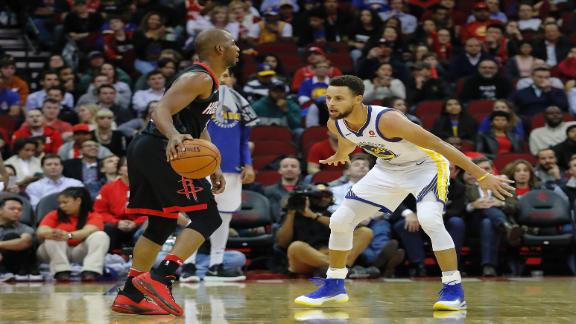 With LeBron James, Russell Westbrook, James Harden, Kevin Durant and others hitting the court, the stars will be out for ABC's Saturday doubleheader.

Our expert panel goes 5-on-5 to debate some of the biggest questions surrounding the Cavaliers-Thunder (3:30 p.m. ET) and Warriors-Rockets (8:30 p.m. ET) showdowns.

1. Fact or fiction: LeBron James will win another title or MVP in Cleveland.

Chris Herring, FiveThirtyEight:Fiction. Short of the Cavs using that Nets pick -- something they seem unlikely to do, given the lack of clarity surrounding LeBron's free-agency options -- it's hard to see how they earn another title. He could win MVP again, but one would think that window begins to close in another year or two as well, given what Giannis Antetokounmpo and Anthony Davis are showing.

Tim MacMahon, ESPN.com:Fiction. His chances at MVP are a heck of a lot better than winning another title with the Cavs, but not good enough for me to bet on it. The Cavs' extended struggles decrease LeBron's odds of winning MVP this season and probably his odds of staying in Cleveland this summer.

Dave McMenamin, ESPN.com:Fact. So long as the Cavs shake off their midseason slump and start stringing wins together again, LeBron's MVP candidacy should come into focus. And he's trying to play all 82 games, which could bolster his case. Now, another title? That's a different story.

Brian Windhorst, ESPN.com:I can't give an iron-clad answer. He's playing at a level to win another MVP, but the Cavs don't excel in the regular season enough for him to win. So he's at MVP level in my mind, but he has fallen back in the race unwittingly.

Royce Young, ESPN.com:Fact. LeBron is still the best player in the NBA -- though the gap is narrowing -- and because of that, the window remains open for him to accomplish either. The catch here is the "in Cleveland" part, which clearly is complicated and unknowable, but as it stands right now, remaining in Cleveland seems like the most likely scenario, so the opportunity for both is still there.

2. Fact or fiction: Paul George will be in a Thunder jersey next season.

Herring:Fiction. I tend to think that George will get to the Lakers any way he can, unless the Thunder make real noise and show themselves to be competitive in a Western Conference finals series. He's probably the most vocal under-contract star I've ever seen in regard to the idea of potentially playing for a specific team.

MacMahon:Fact. I think the Thunder present George's best chance of playing for a legitimate contender, and he seems to have figured out how he best fits with Russell Westbrook. Now, I reserve the right to change my mind if LeBron decides he wants to pair with George and go to the Lakers.

McMenamin:Fiction. L.A. is an alluring temptress. Don't believe for a second that wins in Oklahoma City are weighted the same as the potential for wins in Southern California. We all saw the spectacle when the Thunder went to play the Lakers.

Windhorst:I don't know. So much will depend on how this season ends. There are plenty of people who operate in the league who swear he's headed to L.A. However, that would buck a pretty significant historical trend. Top free agents don't typically downgrade chances to win a title. The Lakers are very far from a title contender even if they add him. The Thunder have a more legit chance.

Young:Fact. George has his attention on two main things: (1) winning, and (2) getting the attention he feels he deserves as one of the premier all-around players in the league. And he has the opportunity for both in Oklahoma City. There's clearly the connection to Los Angeles, and other destinations that could be attractive, but George has talked honestly about wanting to build in OKC alongside Russell Westbrook and Carmelo Anthony. So as a decision nears, the sensible solution could be to postpone it: sign a one-year deal with the Thunder (plus a player option), run it back with Westbrook and Melo (who has a player option this summer he's likely to pick up), let the dust settle on LeBron's future, see who clears cap space and get a little longer look at the development of Lonzo Ball and the Lakers.

Herring:Fact. The stars seem to be aligning really nicely for Steph, who has had an unbelievable season when he actually has been on the court. Harden seemed best positioned to finally win one, but he missed time and the Rockets have finally cooled off. That Steph leads the NBA in offensive box plus-minus is meaningful, since the past six MVP awards have gone to the person who held that distinction.

MacMahon:Fiction. It's James Harden's award to lose at this point. A seven-game absence didn't change that. Harden is playing at a significantly higher level after being the MVP runner-up (again) last season. You can make good cases for Curry and Durant, but the vote splitting between the Warriors stars will prevent either from winning.

McMenamin:Fiction. How do you choose one as the most valuable on their own team, let alone in the league?

Windhorst:Maybe. Durant or James would probably be 1-2 or 2-1 on my ballot at the moment. Durant has blossomed into a two-way monster who can dominate at both ends; he's playing the best of his career. He definitely is right there at the top in my opinion.

Young:Fiction. Both Durant and Curry have missed a chunk of games because of injuries, but unlike my current front-runner James Harden, who has missed a handful of time himself, the Warriors mostly didn't miss a beat. It can be a strong MVP bullet point to note how your team performed with you out, and the Rockets are clearly not the same kind of team with Harden sitting, while the Warriors, obviously dominant in large part because of the excellence of Durant and Curry, can weather a superstar's absence better than any other team.

4. Fact or fiction: The Rockets have enough to knock off the Warriors in the West.

Herring:Fact. They have enough, but that doesn't mean they'll fully realize that potential, or that Golden State won't find a way to hold them down. The Rockets are damn good, but they need to be healthy to get back to what they were on defense for the first month and a half, and for everything else to go right to dethrone the champs.

MacMahon:Fiction. The Warriors might be the best collection of talent in basketball history, and all the pieces fit together. The Rockets are really good when they're rolling, but it'd be a historic upset if they'd knock off the Warriors. Now, if LeBron decides to head to Houston next season ...

McMenamin:Fact. I look at it like Dirk Nowitzki going up against the San Antonio Spurs all those years. San Antonio was better, like Golden State is now, but Nowitzki was able to put together a couple of transcendent series to get the Mavs past the Spurs a couple of times. It feels as if James Harden will have a similar career arc versus the Dubs.

Windhorst:They do, but I'm not going to say "fact" like I am predicting the upset. The Warriors' second unit is a weakness, especially offensively. Andre Iguodala and Shaun Livingston are not having good seasons, and Draymond Green has been struggling shooting. So if the Rockets hit on all cylinders and force the Warriors to score nonstop for 48 minutes, I could see Houston being able to give Golden State issues. But four out of seven? Not ready to say that.

Young:Fiction. The Warriors are overwhelming, but not just because of the top-tier talent and offensive explosiveness. What separates them so clearly from their competition is on the defensive end, where they've remained elite for a number of years. And with Durant emerging as an All-Defense player, the Warriors will be able to combat any lineup the Rockets throw out there with two-way talent that can outscore you, or stop you.

Herring:Fiction: I guess it somewhat depends on what/who you consider to be an All-Star. If we're talking about players who will make this season's team, I'd say no. But there's a strong chance that multiple guys who recently made an ASG will be moved. DeAndre Jordan was an All-Star the season before last, and still has some good years left in him. And Kemba Walker, who made last year's game, seems highly likely to be dealt somewhere.

MacMahon:Fiction. Maybe DeAndre Jordan gets moved. I don't believe Boogie Cousins does. Any other All-Star would be a surprise.

McMenamin: Fact.This is the NBA, where we get things like secret tunnel skirmishes and whatever the heck Kobe's Musecage is. Expect the unexpected. All-Stars will be moved.

Windhorst:Fiction. I don't sense that market is that hot. Too many of the possible names moved are in the final years of their contracts and it makes it hard to get value against merely riding out the season. I think transactions around the draft and in July will be red hot; now I'm not getting that feeling.

Young:Fiction. The big movement was done last summer, with All-Stars hopping around all over. This deadline, there are a few big names that are going to pop up in conversations, but either teams like where they're at long-term with their stars, or they're committed to taking a chance on keeping them (see: Paul George). 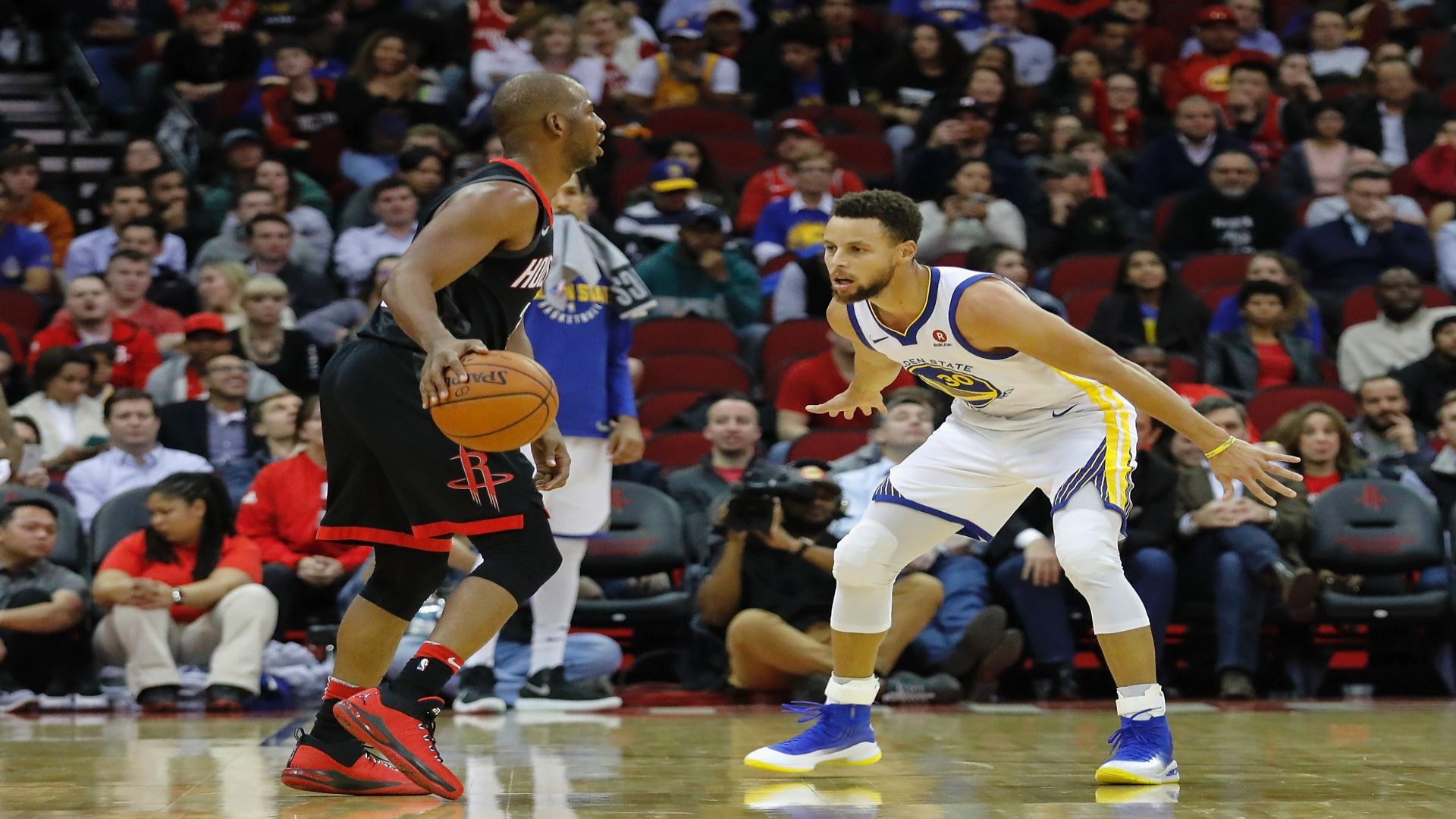 Rockets looking to redeem themselves against Warriors
The Rockets host the Warriors for the second time this season Saturday at 8:30 p.m. ET on ABC.