5-on-5: Which Christmas teams, players have the brightest future? 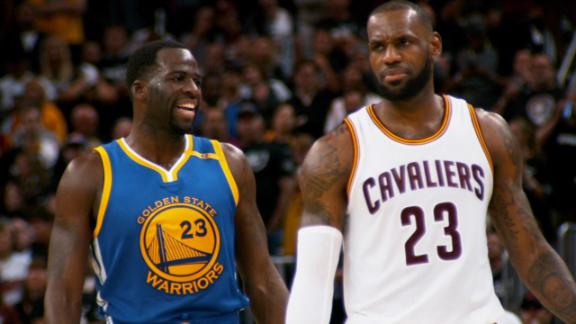 Christmas Day is full of some of the NBA's best and most exciting players and teams. Who has the brightest future? What are the biggest things to watch in the Cavs-Warriors Finals rematch? And which team is in need of a gift for the holidays?

1. Which Christmas Day team (other than Golden State) has the brightest future?

Kevin Arnovitz, ESPN.com:The Boston Celtics. When it's all over, this incarnation of the Celtics might go down as the most masterful rebuild in NBA history. Boston is the current pacesetter in the East, and that's before Gordon Hayward has played a full quarter of basketball. Jayson Tatum and Jaylen Brown will earn a combined $26.2 million over the next two seasons, and though the Brooklyn pick is no longer in their possession, the Celtics are holding onto another bundle of first-rounders during the next two Junes. Bolstered by elite management and coaching, Boston's future ranks second to nobody's.

Chris Herring, FiveThirtyEight.com:Short term? The Rockets. They've finally built a roster that should be able to go toe-to-toe with this version of Golden State. Long term? If their health holds up, it's the Sixers. They already have two potential superstars, and we still haven't even seen their most recent No. 1 overall pick fully healthy yet. If Markelle Fultz gives them anything, watch out.

Chris Haynes, ESPN.com:Houston. If it locks up Chris Paul long term and maintains the ability to acquire another supreme player in the offseason, the Rockets will be a legitimate force to be reckoned with for the next handful of years. Golden State's path to the Finals is not so wide open.

André Snellings, ESPN Fantasy:Long term, no team has a brighter outlook than the Philadelphia 76ers. Joel Embiid and Ben Simmons both project to be generational talents, Dario Saric has demonstrated 20-10 potential and Markelle Fultz is still a shiny gift in the package. If everyone stays healthy, which is admittedly a big if, the future of The Process in Philadelphia looks blinding.

Kevin Pelton, ESPN Insider:Celtics. The 76ers might be able to do the Celtics better in terms of potential star talent, but Boston has the deeper roster -- one that's already contending now, without Gordon Hayward. Add in the lottery picks the Celtics still have coming from other teams even after trading for Kyrie Irving, and their talent base should continue to improve.

2. Which young player in action on Christmas Day has the brightest future?

Herring:Ben Simmons. He's already pretty close to being physically dominant and is a better defender than we realized he would be. But he's a top-15 or top-20 player already and isn't even trying jumpers yet. He could be an all-time great.

Snellings:Karl-Anthony Towns has already demonstrated a dominant inside-out offensive game that is perfect for this day and age. His defense has been his biggest weakness, but he has the physical ability and work ethic to eventually excel on defense. More importantly, he has never missed a game in his NBA career. Embiid, Simmons and Kristaps Porzingis have absurd upside, but they have also lost a lotof games to injuries and are thus riskier long term.

Pelton:Joel Embiid. That he has been so good the past two seasons is incredible given how little high-level basketball experience he has. Embiid's size and skills make him a matchup nightmare. If he can improve his pattern recognition to go with that, Embiid should be one of the league's best players as long as he's on the court.

Arnovitz:From the early game, take your pick from Joel Embiid, Kristaps Porzingis and Ben Simmons. I'll take Simmons because his combination of size, vision, playmaking and athleticism is ungodly for a guy who has only 31 NBA games to his name. He's already an all-NBA defender and an exceptional rebounder, and his ability to improvise and find shot-makers in real time allows the Sixers to zip up and down the floor. The outside shot might come -- and it might not. But if Simmons can get to the rim and finish as effortlessly as he's shown in the first 10 months of his NBA career, then the Sixers have the luxury of patience.

Haynes:Ben Simmons. He's proved in such a short time that he's already one of the most versatile players in the association. If he develops a consistent outside shot, he would instantly be mentioned as a top-10 player and possibly even top-5 player.

3.Which team most needs a 'gift' between now and the trade deadline?

Pelton:The Timberwolves could badly use another wing as part of their push for a first playoff berth since 2004. Shabazz Muhammad has washed out of the rotation, and while Marcus Georges-Hunt has defensive potential, he's not enough of an offensive threat to merit rotation minutes. Unfortunately, acquiring one might be difficult because Minnesota has little in the way of matching salary besides Nemanja Bjelica, who's in the rotation when healthy.

Herring:The Cavs will get theirs soon in the form of a 5-foot-9 point guard who averaged almost 30 points a game last season. Seeing exactly what Isaiah Thomas brings to the table will likely help inform the Cavaliers of what to chase, if anything, to close the gap between them and the Warriors.

Snellings:The Celtics are the closest team to contending that appears to be just short, and they also have the clearest path to improvement. They need more firepower plus another big who can help anchor the defense and shoot. Plus, they've still got tradable assets. On the other hand, a Hayward return plus a convincing call from Danny Ainge to unretire Kevin Garnett could do it as well.

Haynes:They aren't on the Christmas lineup, but thePortland Trail Blazerscould use one. They've hovered in the middle and camped near the bottom of the top eight in the conference the past couple of years. With Damian Lillard turning 28 next summer, the time is now for this organization to turn the corner, but the roster composition doesn't bode well for internal change. For that kind of change to happen they need help -- via trade -- as bad as any team out there.

Arnovitz:The Washington Wizards are a net 7.8 points per 100 possessions better with John Wall on the floor, and they desperately need a pristine left knee in exchange for the one that's hobbling their point guard. The defense suffers mightily from his absence, as do guys like Otto Porter, Jr. (61.4 percent true shooting with Wall vs. 53.3 percent without him), and Marcin Gortat (59.8 percent vs. 50.5 percent). There are a select few teams who can absorb an injury to a player of Wall's caliber, and the Wizards simply aren't one of them.

4. What are you most excited to watch in Cavs-Warriors?

Haynes:LeBron vs. KD, Part 2. Kevin Durant says LeBron James passed the torch to him when he hit that dagger of a 3-pointer over James in Game 3 of the 2017 NBA Finals. James feels that he's still the best player on the planet, and he'll be out to prove that the torch never left his side.

Snellings:Cavs-Warriors will be missing the superstar point guards on both sides, so it won't be a full representation of what these teams are capable of. So I'll look forward to the matchup between James and Durant. Durant earned the Finals MVP in their last meeting and has gone nuts since Steph Curry got hurt, but LeBron is having a ridiculous season himself. This is likely the greatest one-on-one matchup possible in today's NBA.

Arnovitz:LeBron. There is something mesmerizing about watching a guy who has logged more than 50,000 career NBA minutes improve his game in his15th season. At this point in his career, LeBron is operating a finely tuned clutch, pressing and releasing his game to exact the most damage with the least effort on every possession. With Steph out, we won't glean much about a possible June showdown, but this -- LeBron in his late prime -- we do get.

Pelton:How Kevin Love holds up at center defensively. When the Cavaliers went to small lineups with Love in the middle during last year's Finals, they had relatively little experience playing the style. Will they be more effective now that Love is entrenched as a starting center?

Herring:With all the history between Golden State and Cleveland, I just like watching these two teams square off in general. But it will be cool to watch LeBron and KD, since both guys have had to shoulder a heavier scoring load than usual because of injuries.

Snellings:I got my love of the NBA from my father. But he worked at least two jobs during my childhood, so I hardly ever got to sit and watch a whole game with him. Also, as a young kid, there were five NBA immortals in my eyes: Magic Johnson, Larry Bird, Kareem Abdul-Jabbar, Isiah Thomas and the greatest of them all, Julius Erving. I remember one Christmas, after opening the gifts and eating, sitting with my dad and watching Isiah and Dr. J battle on Christmas Day. Dr. J's 76ers won a close game. Life got no better than that.

Arnovitz:There was a small media presence in San Antonio for the Thunder-Spurs Christmas Day game in 2014. Gregg Popovich fielded a question from a local reporter about his Christmas haul that morning. Popovich said that since the Spurs drafted Tim Duncan in 1997, he's never asked anyone for a gift for any occasion.

Herring:I still remember 2011 pretty well, simply because it was odd in the sense that it was also the first day of the season because of the lockout that took place earlier in the year. A close game between the Knicks and Celtics; Dirk and the Mavs getting their rings before a rematch with LeBron and the Heat; an incredible game-winning floater from Derrick Rose against Kobe and the Lakers.

Haynes:Before it was KD vs. Russ, it was Shaq vs. Kobe in 2004 -- Shaq's first game back in Los Angeles since being traded. The Lakers picked Bryant to be the face of the franchise moving forward. The two had so much disdain toward each other. Would they acknowledge each other prior to tip? Would they get into it during the game? Those were some of the thoughts in your mind at the time. It really put Christmas Day games on the map.