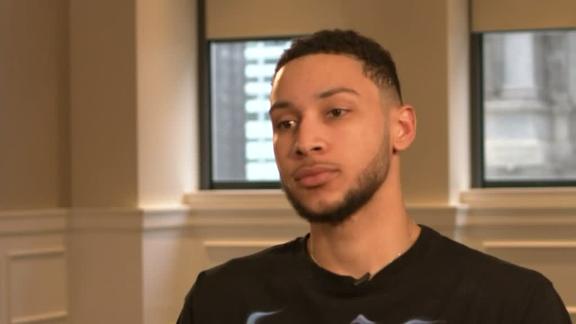 PHILADELPHIA -- 76ers rookie Ben Simmons made it clear who he believes should win the Rookie of the Year award.

"Who would I pick? Me, 100 percent," Simmons told ESPN at the Ritz-Carlton in downtown Philadelphia on Saturday.

"I think I have been playing solid all year," he continued. "If you look at the numbers, you will see. People who know the game know."

The NBA postseason awards will be unveiled on June 25.

Simmons is in elite company. His 12 triple-doubles for a rookie places him second in league history, behind Hall of Famer Oscar Robertson (26). Magic Johnson, whom many consider the greatest point guard to take the court, compiled eight his rookie year.

The Australia native is doing it all for the Sixers, averaging 16.0 points, 8.1 rebounds and 8.2 assists per game. And his team is sitting in the third spot in the Eastern Conference, enjoying a league-high 14-game winning streak. The Sixers have won 50 games for the first time since the 2000-01 season.

When the 6-foot-10 point guard was told the Rookie of the Year race appears to be a two-man show, he buried his head down and proceeded to chuckle. Asked what rookies have caught his attention this year, he didn't mince words.

"None," Simmons responded promptly. "I want to be where the greats are. So, for me, I watch the guys like [Kevin Durant], [LeBron James],[Stephen] Curry, Russell [Westbrook]. Guys like that. That's where I want to be. I think for me, that's what I love to watch."

Utah Jazz guard Donovan Mitchell is the other rookie phenom vying for the honor. The 6-foot-3 combo guard is averaging a rookie-high 20.5 points per game and became the fastest rookie in league history to knock down 150 3-pointers, reaching the mark in 63 games;Portland Trail Blazers All-Star point guard Damian Lillard previously did it in 68 games. Mitchell is second on the all-time 3-point rookie list. He is seven triples away from the rookie record (185), also owned by Lillard.

Furthermore, Mitchell's offensive explosion has propelled the Jazz to the fourth spot in the Western Conference standings. Utah wasn't expected to sniff the playoffs this season once Gordon Hayward bolted for Boston last summer.

The Sixers point guard doesn't want to be compared to Mitchell, or any other rookie.

"I don't really listen to comparisons," Simmons said. "You can compare players and whatever it is, but at the same time, everybody is their own player."

Simmons, the No. 1 pick in the 2016 draft, sat out the entire 2016-17 season with a fracture of the fifth metatarsal bone of his right foot.

Some within NBA circles subscribe to the notion that Simmons is not a true rookie and shouldn't be eligible to win the award.

"Coming off a broken foot is definitely not an edge, but people are always going to say what they want to say," Simmons said. "But at the end of the day, this is my first year in the league. If you're a guy coming from overseas, you're still a rookie and you can be 30 years old. So there's a rule in there."

On Friday, Simmons was part of an epic duel withJames, whom Simmons considers a mentor. The rookie finished with 27 points, 15 rebounds and 13 assists while James registered 44 points, 11 assists and 11 rebounds. Philadelphia won, overtaking Cleveland for sole possession of the No. 3 seed.

Simmons credits coach Brett Brown for giving him the keys to the floor general role.

"He put me in position as the point guard, and I don't think he thought it would work out this well as it has," Simmons said. "I think it is a lot of credit to Coach for sticking me in that position and trusting me."

And although the Rookie of the Year award may be the first personal goal he would like to obtain, he has loftier goals in sight.

"Championships," Simmons said. "I want to be the Defensive Player of the Year ... MVP. There's a lot of accolades I want to get, but I ultimately want to win a ring." 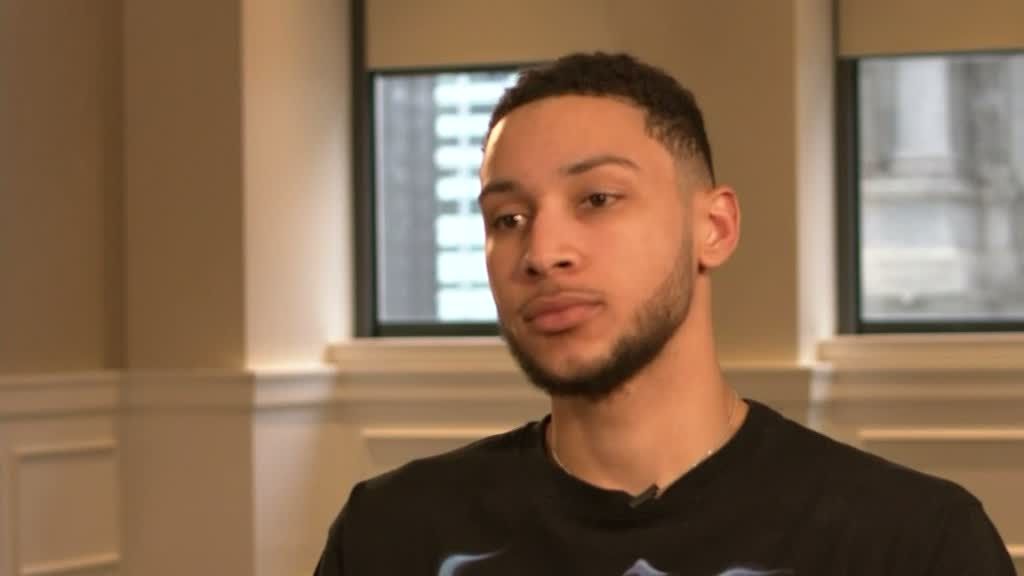 Simmons laughs at suggestion that anyone but him would be ROY
76ers rookie Ben Simmons explains why he deserves to win the NBA's Rookie of the Year Award.
Report a correction or typo
Related topics:
sportsespnben simmonsphiladelphia 76ersnbarookieroy
Copyright © 2022 ESPN Internet Ventures. All rights reserved.
TOP STORIES
Building owner charged in fire that led to firefighter's death
Witness: Trump grabbed steering wheel, demanded to go to Capitol
Carry permits expected to skyrocket in NJ after SCOTUS ruling
Neighbors tired of pickleball noise: 'It's as loud as a rock concert'
Epstein associate Ghislaine Maxwell sentenced to 20 years in prison
Off-duty corrections officer robbed, carjacked in Philadelphia
SCOTUS abortion decision: Women of color will likely be most impacted
Show More
Bryce Harper set for thumb surgery, Phils hope he plays this year
Black bear dies after getting stuck inside hot car in Tennessee
$6 billion will be infused into Navy Yard to make it a 'destination'
Grandmother of Uvalde school shooter released from hospital
Photos released of vehicle sought in Bridgeton hit-and-run
More TOP STORIES News