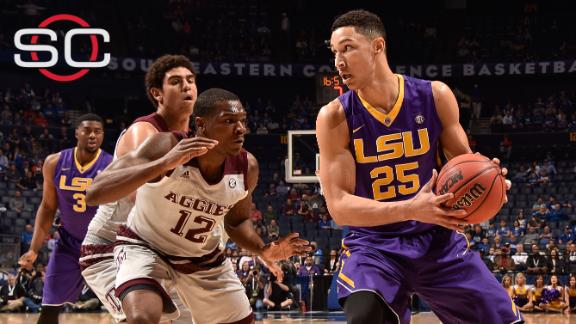 The Philadelphia 76ers had their first face-to-face meeting with presumptive No. 1 overall pickBen Simmonson Thursday, ESPN.com has learned.

Sources with knowledge of the meeting said Friday that new Sixers general manager Bryan Colangelo and coach Brett Brown -- in the latest signal Philadelphia plans to take LSU's Simmons with the first pick in next Thursday's draft -- headlined a contingent of team officials that came to Cleveland to dine with Simmons and agent Rich Paul before Thursday's Game 6 of the NBA Finals.

The Sixers, sources said, came away impressed by the 20 pounds of muscle Simmons is said to have added to his physique since the end of the college season and viewed the meeting as the start of "building a relationship" with the player they are strongly expected to select ahead of Duke'sBrandon Ingramwith the first pick next week.

Thursday's sitdown did not include any basketball work, but sources say that the Sixers are to date the only team that has been granted direct access to Simmons in the lead-up to the draft.

The Sixers were also given Simmons' medical information and that seeing his physical before drafting him No. 1 was a major priority for the Sixers, sources told ESPN's Chad Ford.