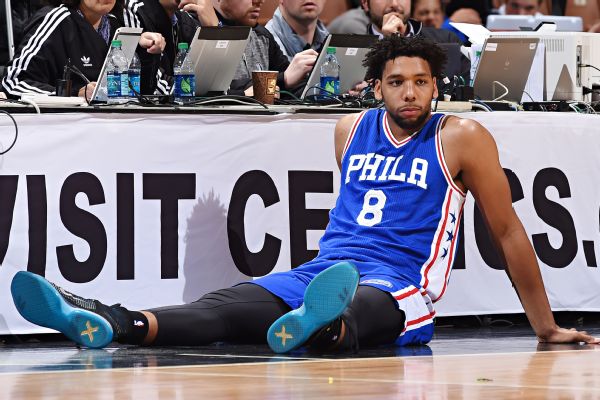 He isn't a part of the franchise's present, nor its future. He was the third overall pick in the 2015 NBA draft and a member of the first-team All-NBA Rookie team, but that's disappeared into the distance. The Sixers are undergoing a franchise renaissance, armed with young superstars Joel Embiid and Ben Simmons.

As for Okafor, he has been cast aside, a casualty of a process that has moved on without him.

"I would like for them to just send me somewhere where I can get an opportunity," Okafor told ESPN. "I've done everything they've asked of me and I would just like to get an opportunity to play with a trade or a buyout. I just hope something happens quickly.

"This is my third year in the NBA, and I know it's a business. I don't know if it's fair or not, but in talking to other people in the NBA, talking to retired players, one thing I've heard them say is that what's going on with me isn't right and they've never seen anything like this before.

"I know it's business, but in my eyes, I don't know if it's good business."

There are legitimate reasons why Colangelo hasn't found a trade for Okafor. A year ago, those centered on questions about Okafor's durability and knee surgery to end the 2015-16 season. This season, Okafor returned 20 pounds lighter, fitter and far more deft on his feet.

Colangelo's asking price has steadily dropped for Okafor, from two first-round picks to a first and a solid player to where it stands now, a second-round pick, league sources said. As for the politics of giving up on the No. 3 overall pick, remember: Colangelo didn't select Okafor over Kristaps Porzingis in the 2015 draft -- his predecessor, Sam Hinkie, did.

"We appreciate the effort that [Okafor] has put forth, and other than a little frustration expressed recently, he's been patient waiting for an opportunity to play," Colangelo told ESPN. "I continue to explore opportunities with both Jahlil and [agent] Bill Duffy to find a more suitable spot for him."

Colangelo resisted any trade proposal that cut into the Sixers' $15.1 million in salary-cap space prior to Nov. 15, because he planned to use that as part of his contract extension and renegotiation offer to forward Robert Covington. That limited the Sixers to trades that would bring back only the equivalent of Okafor's $5 million salary, or less.

Once Covington agreed to his deal, the declining of Okafor's $6.2 million fourth-year contract option for the 2018-19 season further compromised the Sixers' ability to trade him.

More than half of the NBA's teams suggested to ESPN that they would have an interest in acquiring Okafor as a long-term project. But none seem inclined to give up a draft asset to do so. All prefer to wait until he's a free agent -- which is why Duffy and Okafor are pushing hard for a buyout, especially considering that the Sixers are flush with multiple first- and second-round draft picks over the next several years.

So far, Colangelo has rejected discussions on a contract buyout that would allow Okafor to become a free agent. Colangelo is holding out the possibility that Okafor's $5 million salary could be packaged as part of a bigger deal before the Feb. 9 trade deadline, even if he can't find a singular move involving Okafor, league sources said.

That's where the disconnect comes between Colangelo and Okafor's camp, because waiting on that improbability could cause this to become a lost season for Okafor.

In the end, the question becomes: At what price does Colangelo cost himself and the franchise by failing to make the goodwill gesture of letting Okafor go for nothing? Duffy is one of the NBA's most prominent agents and has a strong working history with Colangelo. One of Duffy's clients, Steve Nash, changed the course of Colangelo's front-office career when he left Dallas to sign a free agent deal with the Phoenix Suns in 2004.

"I'm hopeful that Bryan will do what has always brought him and the players in his organization success and be flexible as Jahlil has handled himself the right way," Duffy told ESPN. "There's been a focus on trading Jah for the past nine months, but nothing has come to fruition. At this point, it's time to exercise that flexibility because I don't think anything in the marketplace is going to change. His contract is still going to expire in June, and teams are still going to hold onto their assets.

"We are simply requesting the organization be willing to proceed reasonably and allow Jah to get on with his career," Duffy said. "The Sixers are positioned well for the present and the future, and we only want the same for Jahlil."

For now, Colangelo continues to make trade calls, Duffy continues to push for the buyout and Jahlil Okafor sits on the Sixers bench. He turns 22 years old in December.