AP
By DAN GELSTON
PHILADELPHIA -- Joel Embiid used some body english as he scampered down the baseline and tried to will Marco Belinelli's off-balance 3-pointer through the net.

Belinelli buried it, because of course he would. Even the wild ones go in of late for the Sixers.

With their injured Embiid on the bench, the 76ers proved one more time in their biggest game in six years they can romp without their All-Star. Embiid wore a white mask as he rang a miniature Liberty Bell - then the Miami Heat got their bell rung in Game 1 of the first-round series.

Ben Simmons had 17 points, 14 assists and nine rebounds in his playoff debut, and the Sixers rolled to a 130-103 victory on Saturday night for their 17th straight win.

"I feel this group has something special in it," coach Brett Brown said.

Led by four each from JJ Redick and Belinelli, the 76ers hit a team playoff-record 18 3-pointers (on 28 attempts).

The Sixers have stormed through the NBA since mid-March and the Heat were just another victim in a winning streak that includes nine straight without Embiid.

He was a spectator because of a broken orbital bone around his left eye and has remained hopeful from the outset he can return early in the series. The Sixers could end this one in a hurry with Embiid back in the lineup.

Simmons helped compensate for his absence and dished and dazzled in the paint.

The Heat also had no answer for Sixers super subs Ersan Ilyasova and Belinelli; the duo combined to hit four 3-pointers in the third quarter that helped shift the tone from physical and foul-filled to a long-distance game that allowed the Sixers to put away this one. They used a 15-0 run in the third in their first postseason game in five seasons under Brown to get the rout rolling.

Brown, who won championships as an assistant in San Antonio, won 47 games his first three seasons as the Sixers underwent the Process - and 52, plus Game 1 this season.

"The NBA playoffs is the greatest professor you've ever had," he said.

The 76ers aced their first test.

Redick, who said he briefly lost vision in his left eye following a hard fall early in the game, scored 28 points to lead the Sixers, who host Game 2 on Monday. Belinelli had 25 and Ilyasova 17.

Embiid ditched the black mask he's been wearing in light shooting drills for a white "Phantom of the Opera" mask to ring the ceremonial Liberty Bell before tipoff.

The Sixers crowd roared as Embiid, the self-proclaimed "Phantom of the Process," waved his arms toward the crowd and exhorted them to get louder. Sixers fans started tailgating in the sports complex about seven hours before tipoff and one group posted a sign on their tent that read "Saturdays Are For The Process." The Sixers had a blue-out and gave away free T-shirts in preparation of their first playoff game since 2012.

"There is a gratitude that I have, we have. Finally, here we are and our fans genuinely have something to be proud of with us," Brown said.

He had already mapped out the 76ers' road to an NBA championship on his Instagram feed.

"It's about that time!!! #Playoffs #PhantomofTheProcess

Embiid posted a photo burst of teams in order of a potential road toward a Process title. He started with the Heat, followed by Boston, then a picture of him hugging Cleveland's LeBron James, and ending with Embiid looking at Golden State's Draymond Green.

The Heat would swipe left on the collage.

For a half, the Heat got what they needed against one of the NBA's toughest teams and James Johnson and Kelly Olynyk helped them take a 60-56 lead at the break. Olynyk led the Heat with 26 points.

The Sixers, who set an NBA record with 16 straight wins to end the season, got the rout in full swing with a raucous crowd behind them. The Heat shot 26 percent in the third and were outscored 34-18.

"We all felt good going into the second half and they kind of unleashed a fury of tough shots," Olynyk said.

Simmons assisted on Ilyasova's 3 and then hit a jumper for a 66-63 lead. Dario Saric, who the Sixers waited for two years to come over while he played overseas, also buried a 3 off an assist from Simmons. Simmons made a statue out of Olynyk, crossing him up and busting through for a two-handed slam that brought down the house.

All that was left was the "Trust the Process!" chants and they rang out inside the Wells Fargo Center once Saric buried a 3 in the fourth for a 109-87 lead.

"The atmosphere was amazing," Simmons said.

So were the Sixers.

Heat: G Goran Dragic was back in the starting lineup after missing the season finale with a sore knee.

76ers: NBA Commissioner Adam Silver was at the game. ... Hall of Famer Allen Iverson received a roaring standing ovation and former Eagles star running back LeSean McCoy was at the game.

Embiid's bell ringing made him more of a factor in the game than Hassan Whiteside. Whiteside had just two points and he didn't seem pleased at one point with coach Erik Spoelstra.

"It's not about him," Spoelstra said. "This series and this game, it's going to move quickly. It's not necessarily an indictment to his (play)."

Game 2 is Monday in Philadelphia. 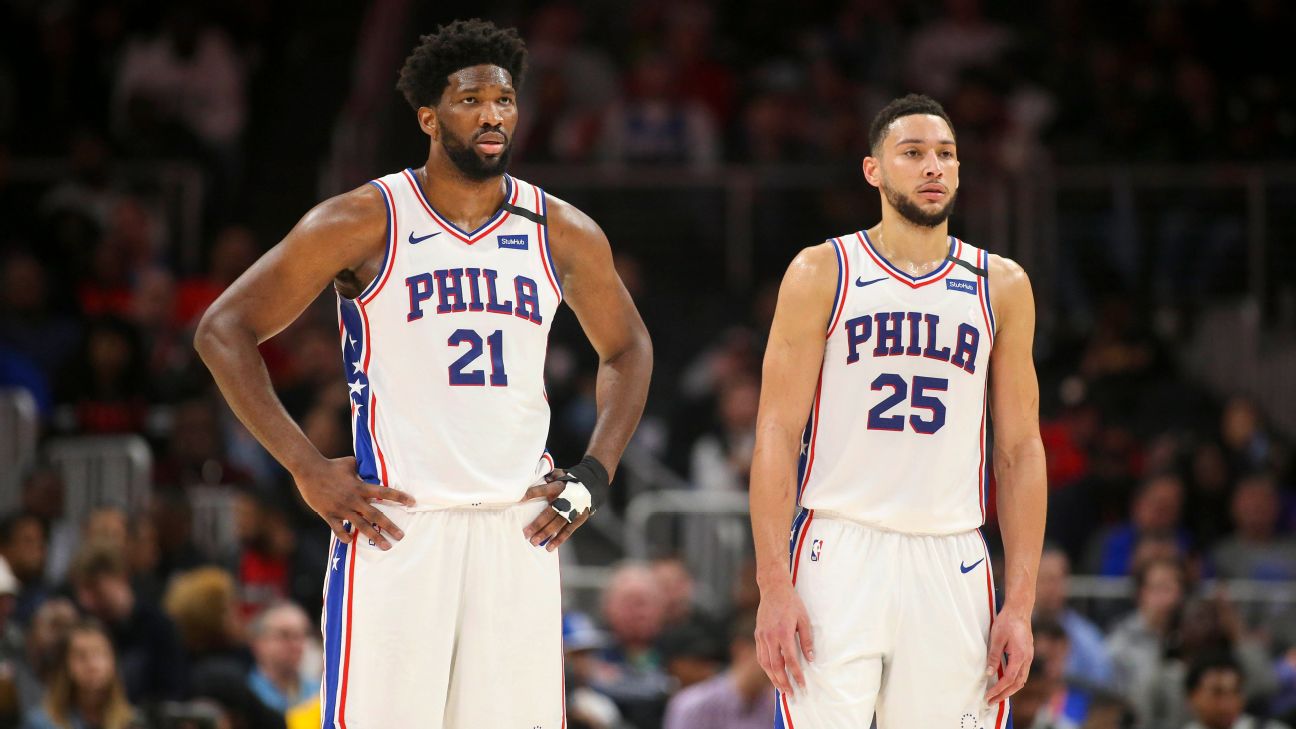 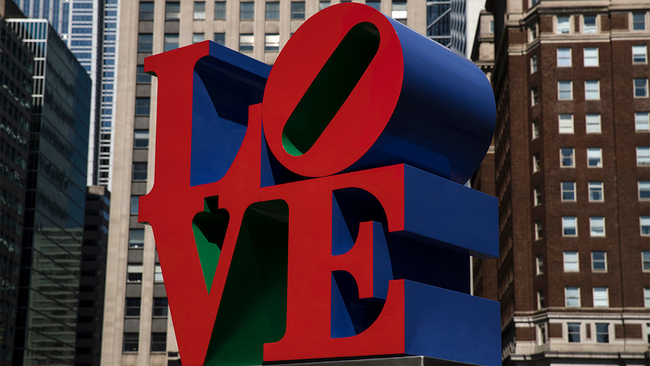 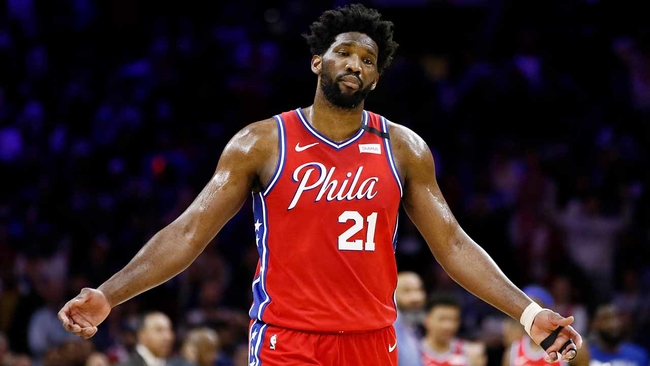 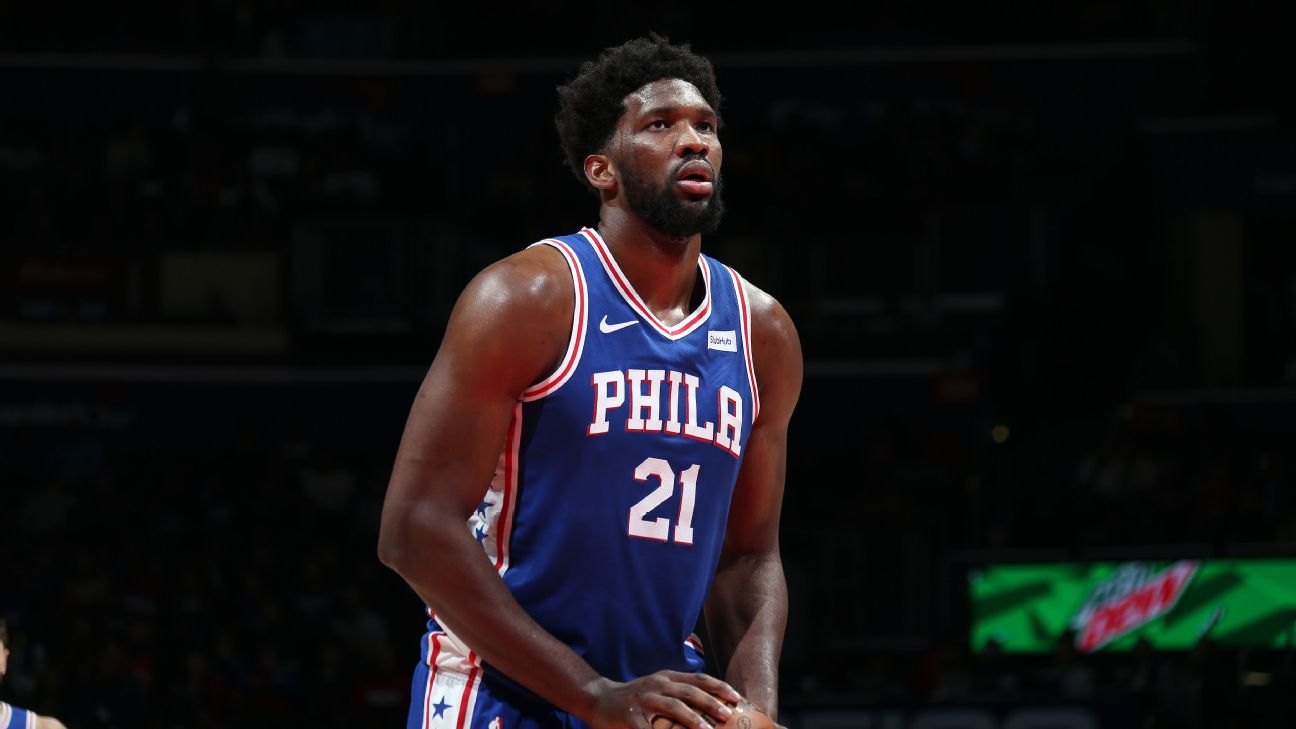