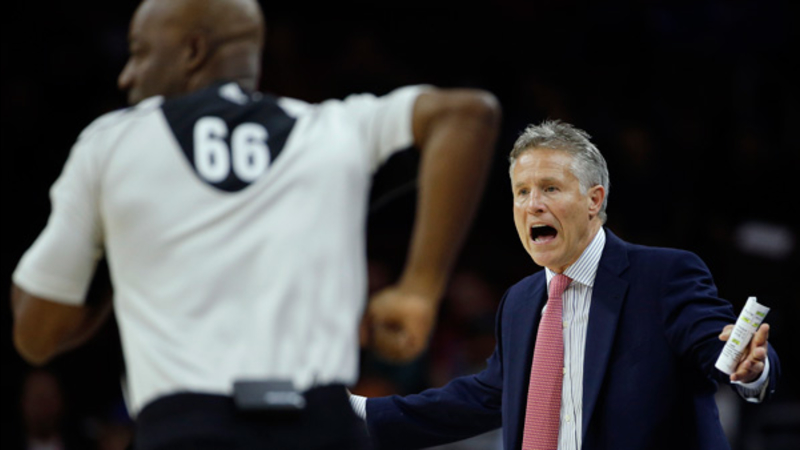 PHILADELPHIA (WPVI) -- Amid one of the worst stretches of basketball in NBA history, the Philadelphia 76ers have signed coach Brett Brown to a contract extension.

Brown's original four-year deal was set to expire after next season.

Brown said Friday he always wanted to stay in Philadelphia, even as the franchise was gutted of talented, veteran players for a shot at building a winner through lottery draft picks.

The front office loves Brown's teaching, patience and leadership in guiding the team through the worst era for a franchise that last won a championship in 1983.

Brown was part of three NBA title teams with San Antonio as an assistant and won another with the Spurs when he served in the basketball operations department in 1998-99. He left after that season to become the head coach of the Sydney Kings of the Australian National Basketball League, but rejoined the Spurs in 2002 as the team's assistant coach/director of player development and was moved to the bench as an assistant under Gregg Popovich in 2006.

Brown also coached the Australian men's national team from 2009-12, and played a key role in helping Manu Ginobili and Tony Parker develop into All-Stars with the Spurs.

"Brett has been everything we anticipated - and more - both as a basketball coach and a partner in building this program," team president Sam Hinkie said. "His tireless work ethic, his daily desire to consistently improve, and his resiliency line up with our core values as an organization. It was not difficult to come to the decision to formally say we want to work with Brett Brown even longer."

Brown will have to take more lumps before the franchise can become a winner again. There's a hope that Jahlil Okafor, Nerlens Noel, injured center Joel Embiid and overseas prospect Dario Saric will blossom into All-Stars and at least one, maybe two, will become franchise-type players.

Based on how some other teams fare, the Sixers could have four first-round picks in the 2016 draft. They also have a state-of-the-art practice facility set to open next year in Camden, New Jersey.

"I think as time has unfolded, we've appreciated really how hard it is, but how exciting it is," Brown said.