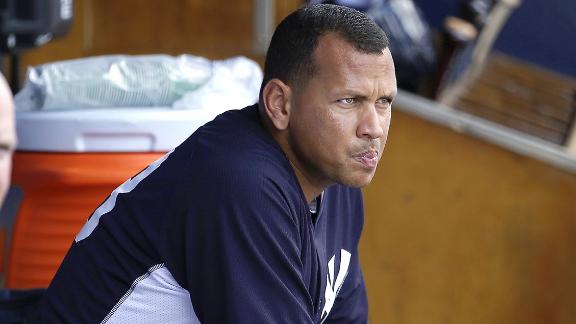 Speaking at Charlotte Sports Park, where the Yankees were playing the Tampa Bay Rays, Manfred said, "Let me be clear about this; he'll be tested exactly like every other player who has violated the program. The program requires more frequent testing for players who are coming back after a suspension."

Manfred's comments come as a reminder of MLB's increased testing for suspended violators of the league's drug policy.

According to the Joint Drug Agreement (JDA), which was adopted by Major League Baseball and the players' association in December 2011, any player who has been disciplined under the JDA is subject to six unannounced urine tests and three unannounced blood tests for the 12-month period following the violation, as well as the same number of tests for every subsequent year the player appears on a team's 40-man roster. Under these stipulations, Rodriguez and Baltimore Orioles slugger Chris Davis (suspended 25 games for Adderall) are just two players that would be subjected to the additional testing this year.

Players who have not been disciplined for drug violations are subject to urine and blood testing at the beginning of spring training, as well as random testing throughout the season and offseason. However, the number of random urine tests is limited to 350 among all players in the offseason, and 140 random blood tests, meaning only a fraction of the 1,200 players on baseball's 40-man rosters will actually be tested.

Rodriguez, along with the other players suspended in the investigation of Biogenesis, was found to have violated the JDA by means of a "nonanalytic positive," meaning one that was determined without the presence of a positive drug test.

Manfred, who conducted the investigation as baseball's CEO under former commissioner Bud Selig, acknowledged that it was troubling that none of the players suspended in the Biogenesis investigation actually tested positive.

"I think our testing is state of the art. It's as good as it can be," Manfred said. "But I think you need to stay really vigilant on both fronts because this is a science -- kind of a black science, but a science nonetheless -- and it evolves. We have to make sure that we're evolving with it."

Manfred's visit to Port Charlotte was part of his tour of spring training camps in an effort to become acquainted with the players following his election to succeed Selig in January.

"I think it's better to meet as many players as you can under these circumstances," Manfred said. "You don't want your first contact with them to be when something's wrong."

Rodriguez has performed well this spring, hitting .290 with two home runs and three RBIs in 31 at-bats. On Thursday, he drew the praise of owner Hal Steinbrenner.

"I'm not a coach or a scout or anything else. He has hit some pretty good balls. He has shown some power. Even to the opposite field the other day. He's been great. He's been working hard. He has been optimistic. I don't think it could've gone better for him."

Manfred, meanwhile, already met three times with Rodriguez since his automatic reinstatement at the end of the last World Series. Both men have publicly expressed the belief that the matter is behind both of them; earlier this week, Rodriguez told ESPNNewYork.com that Manfred has been "phenomenal" to him since the end of his suspension.

"I think I've been pretty public about this," Manfred said. "Alex served a very long suspension. Once he served that time, baseball ought to welcome him back -- and I think we've done a good job. The institution as a whole; teams, central baseball, everybody. He's played well. Good for him."

Information from ESPNNewYork.com's Andrew Marchand was used in this report.