Aaron Nola to start Opening Day for Phillies, but would yield to veteran 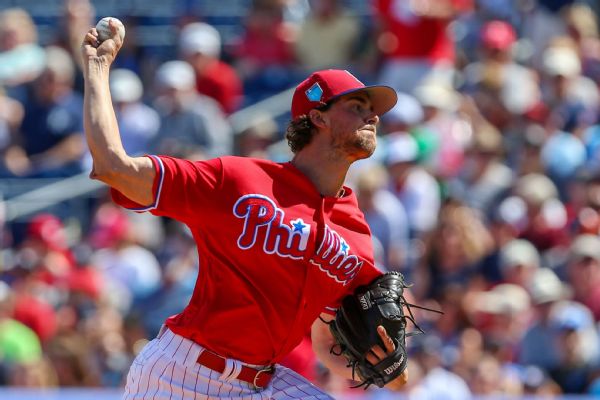 "Barring anything crazy happening, he's our guy. He is the man," Kapler said after Nola pitched two innings in his spring-training debut Sunday, an 8-3 loss to the New York Yankees.

Still, the 24-year-old right-hander wouldn't mind deferring to a more accomplished option should the Phillies sign one of the big-name free agents still available, such as Jake Arrieta or Lance Lynn.

"It would definitely be good to get another veteran," Nola said before Kapler's postgame announcement. "It's always good to have veterans on your team, because for us younger guys it's good to learn from them, because they've been in our shoes before."

Nola is from Baton Rouge, Louisiana, not far from NOLA -- New Orleans, as it happens. He's the ace of a young rotation that also could include Jerad Eickhoff, Vince Velasquez, Nick Pivetta and Ben Lively. Kapler said the decision on his starter March 29 at Atlanta was clear.

"He's earned it. He's unequivocally the right choice and he's an absolute game, grinder and a stud," the rookie manager said.

"Just you look at his performance: It lines up very nicely with the (Max) Scherzers of the world, not far off the (Zack) Greinke line," Kapler said.

Nola gave up Danny Espinosa's three-run double with two outs in a four-hit first, after third baseman Maikel Franco lost Aaron Hicks' popup in the sun and allowed it to fall for a single. Nola struck out three , threw 23 of 31 pitches for strikes and acknowledged pitching the opener "would mean a lot."

"His curveball has the most horizontal break of any pitcher in the big leagues, so the most east-west break," Kapler said. "You can really see that thing take a sharp turn out of his hand."