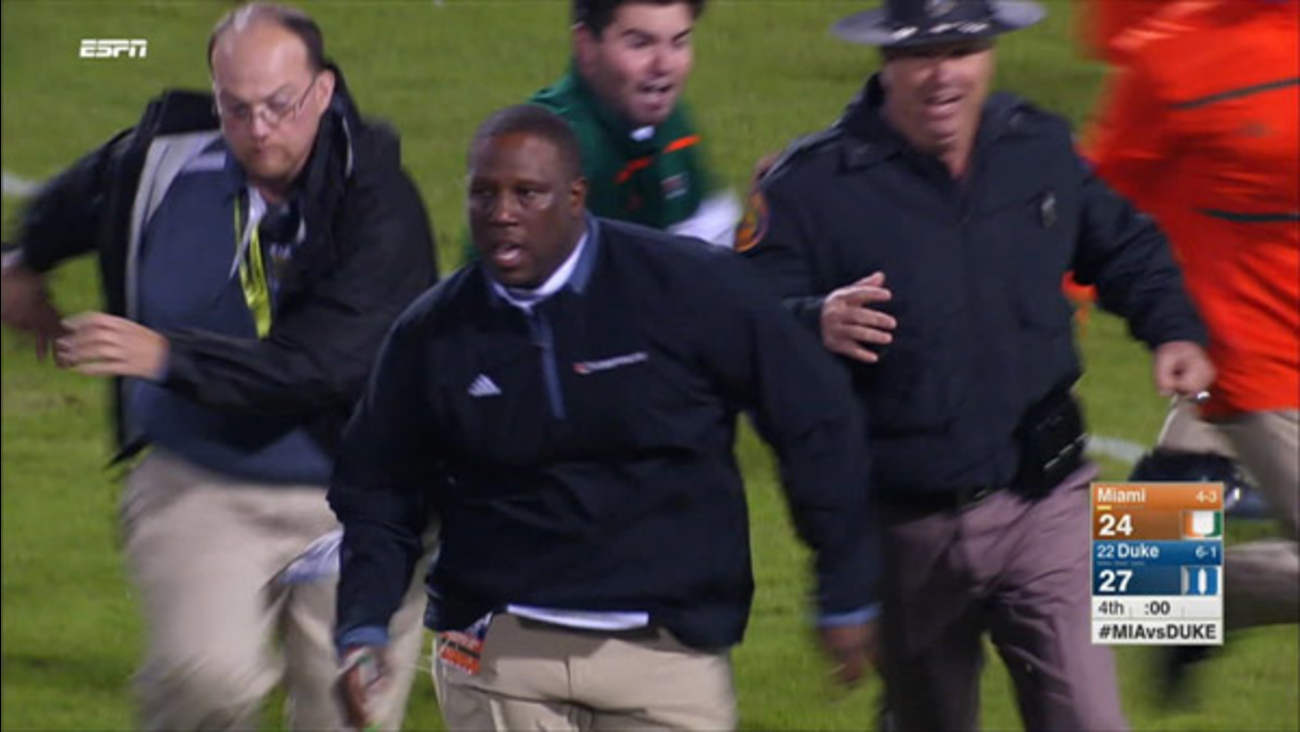 DURHAM, N.C. -- The Atlantic Coast Conference has suspended the officiating crew that worked the Miami-Duke game for two league games following what it called "a series of errors" on the final play.

The league announced the decision Sunday, about 13 hours after the Hurricanes threw a combined eight laterals before Corn Elder took the last one for the game-ending touchdown that beat Duke 30-27.

The band wasn't on the field, but there were 8 laterals...multiple reviews...celebratory back-flips. Watch it all: https://t.co/VUgaTRN1QL

In a statement announcing the suspension of the on-field crew, the replay official and the communicator, Commissioner John Swofford said that final play "was not handled appropriately."

The league says the replay official was wrong in not declaring Miami's Mark Walton down before he flipped the ball, and the on-field crew should have flagged the Hurricanes for an illegal block in the back.

"The quality of our officiating program is of the highest importance to the league and its schools, and the last play of the game was not handled appropriately," Swofford said. "Officiating is an extraordinarily difficult job but our players, coaches, programs and fans deserve the best that can be offered. We will continue to strive to meet that standard."

Elder watched the replay of his game-winning kickoff return repeatedly Sunday morning, his teammates passing around the clip on their phones and tablets while flying home after one of the wildest endings in college football history.

He knew people are outraged about the play. He also didn't care.

"At the end of the day, we got the win," Elder said. "So no matter what they say, we won. That's all that matters."

The score will be forgotten. The ending and ensuing controversy will not.

"It really doesn't do anything to me," Miami interim coach Larry Scott said Sunday morning. "You try to take it in, you see it, you hear it, then you block it out. At the end of the day we believe they got the call right. They took all the time they needed to evaluate all the shots and views and angles they needed to review, and when they came back they couldn't say, 'No, it's not a touchdown.'"

Miami AD Blake James told The Associated Press that he did not have any comment after learning of the ACC's decision.

"It was a great way for our kids to be able to end a tough week and we came out of there with a victory," James said. "We shift our efforts and attention to Virginia."

The Hurricanes - the nation's most penalized FBS team this season - play host to Virginia on Saturday while Duke visits North Carolina.

The league reviewed video and talked to officials and administrators before announcing a list of mistakes it says the crew committed:

- Walton's right knee was determined to be down at the Miami 26-yard line before he flipped the ball to Jaquan Johnson and kept the wild play alive. The league said the replay official should have overturned the ruling on the field that allowed play to continue, saying the correct call would have ended the game.

- The on-field officials should have flagged Miami defensive back Sheldrick Redwine for his block to the back on Philip Carter at the Miami 16-yard line, and the ball should have been placed at the Miami 8 with an untimed down awarded to the Hurricanes.

- The officials correctly waved off a block-in-the-back call on Walton's hit on Breon Borders at the Duke 26 - but they didn't properly explain that the replay official was not involved in that decision.

- They should have penalized Miami receiver Rashawn Scott for running onto the field before Elder crossed the goal line, though that dead-ball call would not have negated the touchdown.