Adam Gase takes over Dolphins, will be youngest head coach in NFL 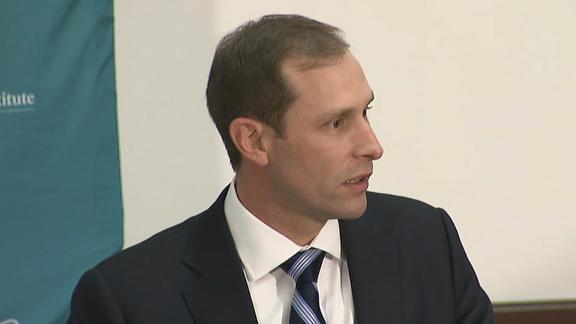 The Miami Dolphins made Adam Gase the youngest NFL head coach on Saturday. They also made sure he'll have significant say as the team looks to end a lengthy playoff drought.

Gase will take over play-calling duties on offense in addition to having final say on the 53-man roster.

That's a lot of responsibility for a 37-year-old rookie head coach, but the Dolphins believe he's up to the task.

"We wanted to get the right leader," Dolphins vice president Mike Tannenbaum said. "Someone that could relate to young and talented players that we believe we have, and somebody that was high energy and competitive. Somebody that could build a great coaching staff, develop them and hold them accountable. Somebody that was open-minded, who had great football acumen and intelligence. And when we looked at Adam, we felt like he had all of those attributes."

Gase comes to Miami after stints as offensive coordinator for the Denver Broncos and then Chicago Bears. He becomes the 12th head coach in franchise history, and was clearly their first choice when they began interviews Monday. The team talked to seven candidates over six days -- including former NFL head coaches Mike Shanahan, Mike Smith and Doug Marrone -- before hiring Gase, who team officials said was very impressive during his interview Thursday.

"Like in business, if you find the right guy, why give a chance for someone else to grab him?'' Dolphins owner Stephen Ross said. "We had done our homework beforehand. It's amazing the respect Adam has in the coaching and player community. That really says an awful lot. He's one of the hardest-working, smartest guys in this business.''

Gase is the fourth consecutive hire for Miami without prior head-coaching experience, joining Joe Philbin, Tony Sparano and Cam Cameron. However, the Dolphins and Gase said that's not a major concern.

"I've been in this profession since I was 18 years old, so that's really more than half of my life right now," Gase said. "The last three years, being a coordinator both for the Denver Broncos and with the Chicago Bears, it's an accelerated growth. In this business, age is only a number but you get older really quick, because every week's a growing experience."

Gase is considered a "quarterback guru," a highly coveted trait for Miami, which has fourth-year signal-caller Ryan Tannehill. Gase worked with quarterback Jay Cutler this season and Peyton Manning and Tim Tebow in Denver in previous seasons.

Both veteran QBs offered praise for Gase on Saturday.

"He's an extremely hard worker -- a grinder," said Manning, who noted that Gase had a "great impact" on him during their three years together in Denver. "He's extremely bright on all things football, an excellent communicator and always eager to learn more. He asks a lot of questions and writes everything down. I've always been impressed with his work ethic and his eagerness to learn more. He'll be an excellent head coach without a doubt. He's ready for this for sure."

Added Cutler: "I couldn't be happier for Adam and his family. I wish he could stay with us in Chicago but everyone has a journey and this is the next part of his. His work with quarterbacks is well documented and I know firsthand how good he is."

Gase said he's looking forward to working with Tannehill, who was given a $96 million extension last year but has been inconsistent with a 29-35 record as a starter.

"I think it's going to start with me," Gase said. "I think he needs a guy that's going to have his back; that he feels comfortable with right out the gate. And I'm going to be working directly with him. And then I am going to hire guys on the offensive staff to also help him develop."

Gase also will be calling all the plays, something he says he's comfortable doing.

"I feel like I've been doing it for the last three years," he said.

Ross, meanwhile, had no problem giving Gase full control of the roster.

"He's making the commitment on determining what the 53-[man roster] is and who the players are -- he's making that decision," Ross said. "So it's not like, 'This is the general manager's player or that [coach's] player.' You've heard that in the past with the organization. That's not going to exist."

During Gase's single season with the Bears, they won only six games and ranked 17th in offensive points. But he helped Cutler reduce his turnovers and post a career-high passer rating of 92.3.

Gase spent six seasons on the staff in Denver, where he helped Tebow win a playoff game. In his first season as offensive coordinator in 2013, Manning and the Broncos scored an NFL-record 606 points and reached the Super Bowl. The following year they scored 482 points, the league's second-highest total.

A native of Ypsilanti, Michigan, Gase worked on the staff of Michigan State coach Nick Saban while a student there. He followed Saban to LSU and was a graduate assistant and recruiting assistant before beginning his NFL career in 2003.

His task now in Miami will be filling out his coaching staff.

Cincinnati Bengals defensive backs coach Vance Joseph, who has been a top target of Gase's, is the leading candidate to become the defensive coordinator for the Dolphins, according to ESPN's John Clayton and multiple reports.

The Dolphins also didn't rule out the possibility Dan Campbell, their interim coach for the final 12 games this season, will be part of Gase's staff.

"I'd love to see Dan stay in the organization,'' Ross said.

Adam Gase: Dolphins want to invest in winning
Adam Gase describes what it means to be hired as the new coach for the Dolphins and breaks down his plan to bring success back to the organization.
Related topics:
sportsespnmiami dolphinscoachnflvance josephchicago bearsadam gase
Copyright © 2020 ESPN Internet Ventures. All rights reserved.
More Videos
From CNN Newsource affiliates
TOP STORIES