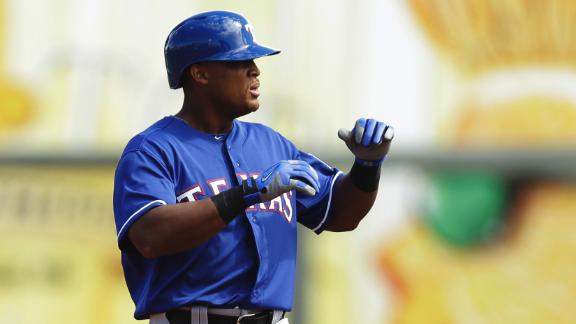 The earliest Beltre can play in a game is April 25 in Seattle (since April 24 is an off day).

He suffered the Grade 1 strain on Tuesday at Fenway Park and hasn't played since. Beltre completed a light workout on Saturday, and manager Ron Washington said the third baseman was hoping to work out again on Sunday to test it out, but rain wouldn't let that happen.

Still, the club didn't want to take any chances on rushing Beltre and having him miss more time, so they made the disabled list decision on Sunday.

General manager Jon Daniels said Saturday that the club was "leaning" that way.

"That's probably the smarter thing, to err on the side of caution," Daniels said. "The last thing we want is to be without him for an extended period of time."

Beltre, 34, is hitting .286 this season with four RBIs as the team's cleanup hitter. Kevin Kouzmanoff has taken his place at third base, and Washington has altered his lineup in Beltre's absence, batting Alex Rios in the No. 3 hole and Prince Fielder in the cleanup spot with Kouzmanoff batting fifth.

This is Beltre's first stay on the disabled list since missing five weeks in the middle of the 2011 season. He has dealt with hamstring issues constantly since arriving in Texas, but hasn't missed many games because of it. The quad is a new injury for him.

Beltre was voted the Rangers' MVP the past two seasons and has won four of the last seven Gold Gloves at third base.

In a corresponding move, the Rangers added recently acquired right-hander Hector Noesi to the active roster. He will serve as the club's long relief man.