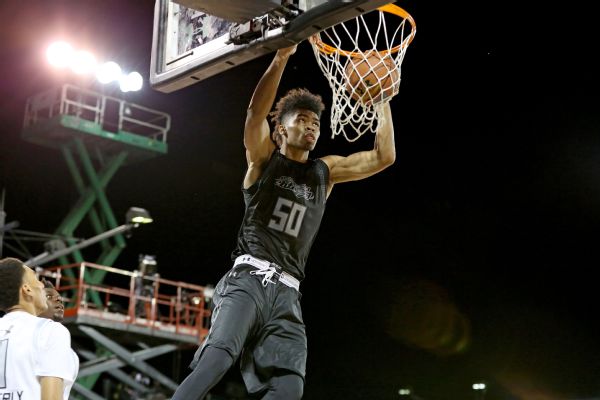 On a day in which Kentuckyand Dukeeach reeled in five-star prospects, it was Alabamaand the SEC as a whole that stole recruiting headlines.

Alabama coach Avery Johnson made a statement shortly after taking over in Tuscaloosa in the spring of 2015, landing a commitment from five-star wing Terrance Ferguson. Ferguson eventually decommitted, but it was an obvious message from Johnson: He wasn't going to let elite prospects go to Kentucky or Kansas or Duke every year.

Johnson zeroed in on both Sexton and Petty as his backcourt of the future, and the coach was able to hang onto both players despite bluebloods entering the picture.

Sexton was one of the biggest risers over the past seven months, going from unranked to top-10 prospect after a stellar performance in the spring and summer. Nearly every high-major school was interested, but Johnson and Alabama had been involved before Sexton became a household name. The Crimson Tide remained in the driver's seat even after the talented guard visited NC State, Kansas and Oklahoma State.

"I felt like coach Avery Johnson, he was just a great coach," Sexton said on ESPNU. "Everybody down there had very great energy. The communication was great. They were on me for a very long time."

The 6-foot-3 Pebblebrook High School (Georgia) product is ranked No. 10 in the ESPN 100. He is the first five-star prospect to pick the Crimson Tide since power forward JaMychal Green (No. 6) committed to Alabama in 2008. Sexton is perhaps the most explosive offensive player in the 2017 class, setting scoring records on the Nike EYBL circuit with the Southern Stampede AAU program. He averaged 31.7 points in the spring and summer, while also making a league-leading 181 free throws in 14 games -- more than double the number of made free throws by the second-place finisher. Sexton also showed his playmaking ability with USA Basketball for the Under-17 World Championship team, leading the Americans in scoring (17.0 points per game) and assists (4.2) while winning a gold medal.

Meanwhile, Petty was the best player from the state of Alabama -- but the Crimson Tide had to beat out Kentucky. Calipari was at most of Petty's games during the spring and summer, and Petty was one of their top targets at shooting guard. However, after Petty canceled his official visit to Kentucky in late October, it was clear he would be Tuscaloosa-bound.

Petty, a 6-5 shooting guard, is ranked No. 25 in the ESPN 100. The J.O. Johnson High School (Alabama) prospect is a big-time athlete who will get most of his production in transition or drives to the rim. Petty averaged 13.2 points, 4.7 rebounds and 2.9 assists with Team Penny on the Nike EYBL circuit, shooting 36.4 percent from 3-point range.

Either Kentucky or Duke has finished with the No. 1 recruiting class in each of the past four years, with the past three cycles featuring the two schools 1-2 in the rankings. Yet Kentucky and Duke entered the early signing period with a total of one commit -- and zero five-stars.

On Thursday, both schools made their moves.

Calipari made Richards (No. 12 in the ESPN 100) and Washington (No. 16) priorities very early in the recruiting process. Richards chose Kentucky over Arizona and Syracuse, while Washington had recently trimmed his list to Kentucky, North Carolina and UNLV. Kentucky was pegged as the favorite for both players, and nothing changed this fall. In fact, Richards took just two visits in the past couple of months -- both to Kentucky. He took his official visit to Lexington in late September, then returned on an unofficial visit for Kentucky's "Big Blue Madness" in mid-October.

Washington joined Richards on the second Kentucky visit and took his own official visit in mid-September, while also going to North Carolina and UNLV.

"Just the way Coach Calipari uses his players and gets them to the next level," Washington said on ESPNU. "I felt that would be great for me."

Richards, a 6-11 post player from The Patrick School (New Jersey), is better on the defensive end at this point in his development, using his length and athleticism to rebound and block shots. A native of Jamaica, Richards' offensive game is improving, and he's a good finisher around the rim. Richards averaged 12.0 points, 9.8 rebounds and 1.9 blocks on the Nike EYBL circuit for the Expressions Elite AAU program.

"Calipari and the coaching staff basically told me that they'll be in the gym with me every day, working on my game," Richards said.

Washington is a more versatile frontcourt weapon, with the skill to make shots from the midrange and perimeter, as well as run the break or finish in the paint. The Findlay Prep (Nevada) product averaged 17.4 points and 10.9 rebounds on the Nike EYBL circuit with Team Penny; he shot 61.9 percent from the field.

"[Calipari] told me he would use me like Trey Lyles and Michael Kidd-Gilchrist," Washington said. "With no positions and just dominate the game."

Duke countered with the addition of five-star Trent Jr., one of the best pure scorers in the country. Trent has received high-major offers since 2013 but eventually trimmed his list to Duke, Michigan State and UCLA before making official visits to all three schools and picking Mike Krzyzewski and the Blue Devils.

"The thing about Duke University, the brotherhood behind it, Coach K, there's so many things about it that's top tier. There's no way you can turn it down," Trent Jr. said on ESPNU. "From how the practices are ran to how they play together, everything about it was top of the line. I just loved everything about it."

Trent, a 6-5 Minnesota native who attends Prolific Prep (California), is ranked No. 8 overall in the ESPN 100. He has consistently scored at both the high school and AAU levels, averaging 26.4 points for Apple Valley High School (Minnesota) last season and then scoring 22.2 points per game for Howard Pulley on the Nike EYBL circuit. Trent Jr. also won two gold medals with USA Basketball.

With Grayson Allen and Jayson Tatum likely leaving for the NBA draft after this season, Duke will count on Trent Jr. for scoring from the perimeter.

"Coach K just emphasized, he wants me to come in, be who I am, play my game, come in with my ego, bring my whole package with me," Trent Jr. said. "Be able to play. Be ready from Day 1."

Trent, who played with Tyus Jones at Apple Valley High School (Minnesota) before transferring out West, is the second commitment for Duke in 2017, joining ESPN 100 shooting guard Alex O'Connell (No. 88). The Blue Devils are expecting to add several more players to the group, with top uncommitted big man Wendell Carter (No. 3) their biggest target left on the board. Five-stars Mohamed Bamba (No. 4) and Kevin Knox (No. 7), along with four-star point guard Matt Coleman (No. 27), are also priorities for Coach K and his staff.

Overall, though, the SEC was the big winner Thursday.

Rayshaun Hammonds is Georgia's highest-ranked commit since Kentavious Caldwell-Pope, ranked No. 24, picked the in-state Bulldogs as part of the 2011 class.

A 6-8 forward from Norcross High School (Georgia), Hammonds is No. 38 in the ESPN 100. He chose Georgia after visiting Athens last weekend. He also took visits to Memphis and Miami, and was a target of Alabama and Texas earlier this fall.

"I kind of knew it," Hammonds told ESPN. "It was the best fit for me. I liked everything about it. I've been there so many times, on unofficial [visits], I can help their team. Coming in as a freshman and starting and playing big-time minutes."

Hammonds is the first commitment in coach Mark Fox's 2017 class. The forward was one of the most productive forwards on the EYBL circuit last spring and summer. He averaged 18.1 points and 7.9 rebounds for the Alabama Challenge AAU program, notching four double-doubles.

"It feels great. Just bringing another top recruit to Georgia, helping them, making a brand," Hammonds said. "It's going to be hot. We're going to try to make a deep run in the tournament. Bring Georgia back to what it used to be." 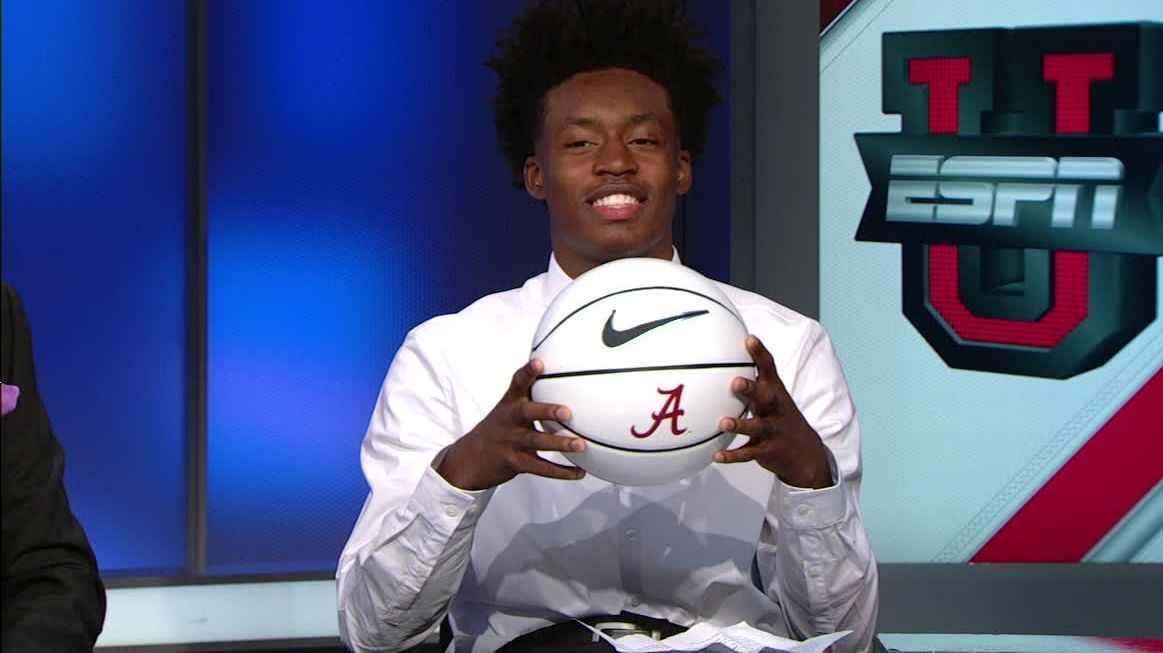