Alex Morgan active, not in starting lineup for U.S. vs. Australia 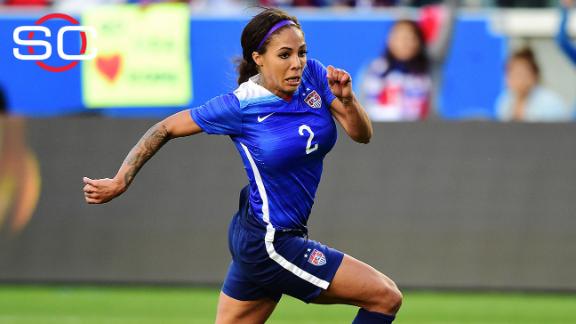 WINNIPEG, Manitoba -- Forward Alex Morgan was not the starting lineup for the United States' World Cup opener against Australia on Monday night but entered the game in the 78th minute.

The speedy 25-year-old, who has 51 goals in 84 international appearances, has a bone bruise in her left knee and hasn't played in a match since Portland's National Women's Soccer League opener on April 11.

Morgan was listed as a substitute for the No. 2 U.S. against the 10th-ranked Matildas. Abby Wambach and Sydney Leroux were down to head the attack.

The U.S. is seeking its third World Cup title but first since 1999 after losing the 2011 final to Japan on penalty kicks.

In the pre-match news conference on Sunday, coach Jill Ellis said Morgan had looked good at practices in Winnipeg.

"Obviously we're going to look at what our needs are, but I'm just excited now that she is back in 100 percent training -- looking great, sharp," Ellis said.

Morgan did not play in the team's three send-off matches in the United States. On Monday she took the field for warmups with pink tape affixed to her left knee.

Morgan sat out nine games with the Thorns last season because of a left ankle sprain she sustained in national team training camp in October 2013. She returned to action for the Thorns in June, then reinjured the ankle last fall during a group stage match of the CONCACAF Women's Championship, which served as qualifying for the World Cup.

She did not return until this year, scoring in a 1-0 victory over England in February and in a 3-0 win over Switzerland in an Algarve Cup match in March.

Hope Solo was in goal, with Alex Krieger at right back, Becky Sauerbrunn and Julie Johnston in central defense, and Meghan Klingenberg at left back. Lauren Holiday and Carli Lloyd were in defensive midfield of the 4-4-2 formation, with Christen Press wide right and Megan Rapinoe wide left.

Six of the starters also were in the lineup for the 2011 final: Holiday, Krieger, Lloyd, Rapinoe, Solo and Wambach.