Alex Rodriguez gets baseball from his 3,000th hit after all 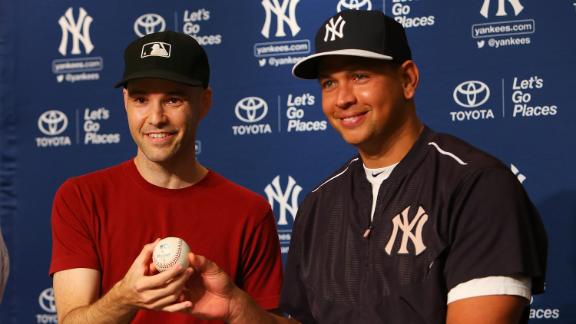 NEW YORK -- It took two weeks, rounds of negotiations and a directive from the Yankees' owner's box, but Alex Rodriguez has received the ball from his 3,000th hit.

The Yankees held a news conference Friday afternoon in which Zack Hample, the fan and persistent foul-ball catcher, presented Rodriguez with the ball at Yankee Stadium.

The Yankees, in a news release, said they will donate $150,000 to Pitch In For Baseball, a charity Hample supports that helps underserved communities afford to play the game. Hample will also receive some memorabilia, tickets and other perks from the Yankees.

During the half-hour news conference, Hample, 37, removed the ball from his backpack and presented it to Rodriguez. The two posed for a series of photos.

During their opening remarks, Rodriguez accepted an apology from Hample, who before recovering the 3,000th-hit ball compared Rodriguez to the devil, on Twitter.

"First of all, you are forgiven," said Rodriguez, 39. "I have a Ph.D. in saying some dumb things over the years."

Rodriguez said he would give the ball to his two daughters.

It was two weeks ago that Rodriguez sent his 3,000th hit into the right-field seats, where it bounced around before landing at Hample's feet.

Hample claims to have snagged 8,000 baseballs -- foul balls, home run balls from batting practice and those tossed to him by players -- in his life and has written a book offering advice on his craft. He declined to make a deal with the Yankees on the night of Rodriguez's feat. Hal Steinbrenner, the Yankees' principal owner, directed team president Randy Levine to try to work out an agreement. The two sides have held multiple talks since Hample retrieved the ball.

"They were just so nice," Hample said of his dealings with Levine and Yankees COO Lonn Trost. "It was just unbelievable how cool those guys were. They didn't pressure me or bully me or use any sort of sinister tactics. They just wanted to have a conversation to get to know me. Mr. Levine said he had heard me being spoken about on the air. 'Eight-thousand baseballs, what is the story?' I told him about my collection, how I've worked in baseball over the years, on and off. I mentioned my involvement with the charity Pitch In For Baseball. At that point, a little light bulb went off in his head."

From there, they had the basis of their negotiations that culminated in Friday's news conference.

The Yankees and Rodriguez have seen a thaw this season to a previously icy relationship, a result of Rodriguez's involvement in the Biogenesis case, his performance-enhancing drug suspension and subsequent failed appeal.Combined with the agreement over his milestone bonus -- which was also going to charity -- it was a special day for Rodriguez.

"It's been quite a year," Rodriguez said. "Never did I think 12 months ago I would be in the position with 660 and 3,000, with two swings of the bat to be able to influence so many people, kids that are in need. And to do this with the Yankees, the union and the commissioner's office, I am just very proud of us doing the right thing in this situation, and I am especially happy to have the ball back and to share it with my daughters. That is going to be pretty awesome."