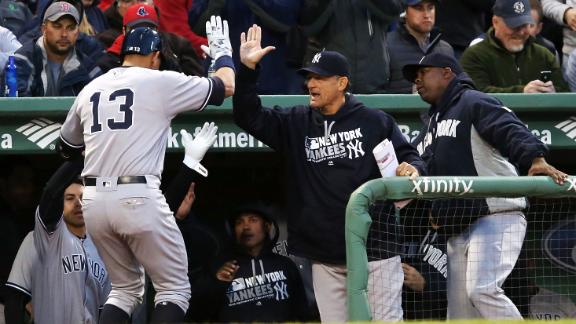 Alex Rodriguez might have made a new friend in Fenway Park -- of all places -- when he gave his bat to a young fan after hitting a home run.

The fan, 8-year-old David Moss, is an Arizona native who attended Friday night's game with his mother and sister and was welcomed at Fenway by multiple members of the Red Sox, including slugger David Ortiz.

Moss' father died in September before he and his son could meet Ortiz in person, according to MLB.com.

"I got to meet them just last night. I even took a photo with them," Ortiz told ESPN on Saturday. "When I heard about [the death of Moss' father], I asked their mom to take a photo of me with the kids, and she was crying when she was taking it.

"Alex saw the whole thing at the beginning, when the ceremony before the first pitch happened. There's not one player that faces a situation like that and doesn't feel humble about it. I haven't met that one player."

Rodriguez, the Yankees' designated hitter, said Saturday that he never spoke to Ortiz and had no idea of the backstory when David asked him for his batting gloves before his first at-bat of the game in the top of the second inning.

Rodriguez said people in the section got excited and starting rooting for him to hit a home run. His response: "Don't get too excited. I'm 40.''

Even so, Rodriguez honored his promise by belting a solo home run off Red Sox left-hander Henry Owens. After touching home plate, he gestured to the Yankees' bat boy to give him the bat and then headed to Moss' seat behind home plate and slipped the bat through a gate in the padded wall.

"Now that kid might be a baseball fan for life,'' Rodriguez said.

It was the 691st career home run for Rodriguez, who has had several memorable moments at Fenway as part of the Yankees' rivalry with the Red Sox.

According to MLB.com, a fan sitting near Moss heard about his family's story and gave them tickets above the Red Sox's dugout so David could get an autograph from Ortiz.

Ortiz also hit a home run after telling a young fan who is battling a serious illness that he'd do just that. The Red Sox beat the Yankees 4-2, thanks to Ortiz's go-ahead, two-run homer in the eighth inning.

Before the game, former Red Sox player Kevin Millar told Ortiz about Maverick Schutte, a 5-year-old fan from Wyoming who was born with a serious heart defect. Ortiz and Millar sent a video to Maverick in which Ortiz said, "I'm going to hit a home run for you tonight. Remember that."

Sure enough, in the eighth inning, Ortiz hit his two-run homer off Yankees reliever Dellin Betances.

After the game, Millar visited Ortiz in the Red Sox's clubhouse and showed him a video from Maverick, who said, "Big Papi, you never let me down, and you're the best player ever in the Red Sox game -- and I'm trying the hardest to get out there at Fenway Park and meet you."

Millar and Ortiz were both moved by the video response.

"Millar was crying when he was showing me the video that Maverick sent him back," Ortiz said. "It was very touching. And I start thinking about it right after, like, when I got home. That was when I really was like, 'Wow, I can't believe this really happened.' And Millar told me that his parents haven't seen him that happy in a long time. He has been very sick. I always say there's something special out there. I'm a huge believer in that."

ESPN's Scott Lauber and Wallace Matthews contributed to this report.

A-Rod makes a friend at Fenway
After Alex Rodriguez heard that David Moss' father died in September before the two of them could see David Ortiz in person, the Yankee said hi to the young fan and agreed to give him his bat if he hit a home run. He then hit a home run.